New Uses for Old Places is a RETROactive series in which we are looking at examples from around Alberta of historic sites that have found interesting new uses for spaces that were originally designed for other purposes. In this last installment we will be looking at King Edward School in the neighbourhood of South Calgary as an example of adaptive reuse project underway to repurpose the building as a mixed-use arts incubator (a place that nurtures the growth and development of artists and arts organizations). 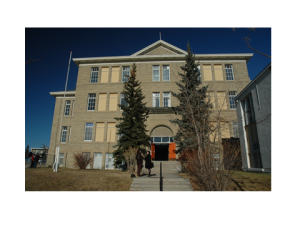 The King Edward School was constructed in 1912 as a four-storey building that features a symmetrical design, rock-faced sandstone walls and a dressed sandstone front entrance. During its time as an institution of learning, the School also functioned as a community hub, hosting dances and other events. The school operated as versions of both King Edward Elementary/Junior High School and South Calgary High School. The school closed in 2001 and sat empty…until now.

In 2011, cSPACE Projects was established by the Calgary Arts Development Authority and the Calgary Foundation for the purpose of promoting opportunities for artist and non-profit arts/community groups. cSPACE became the new owners of the property and is now embarking on an ambitious rehabilitation effort.

The project involved the removal of a 1960s addition that was deemed to be non-character-defining to the historic value of the place as well as the construction of a new addition and two adjacent art studio pavilions. Modelled around the concept of providing a ‘creative commons’, ‘learning commons’ and ‘community commons’, the finished product will include facilities for artistic production, exhibition and rehearsal and will serve as home to a range of arts organizations and independent artists.

To learn more about this project, watch this video:

As part of the project the owner and the City of Calgary have entered into an agreement to ensure that the King Edward School will be designated a Municipal Historic Resource.

(A related example is that of the Hudson’s Bay Company Stables / Ortona Armoury in Edmonton’s Rossdale Neighbourhood that is operated by the Ortona Armoury Tenants Association, a group established to coordinate the involvement of the wide range of artists and related groups currently utilizing the space. The property was designated as a municipal historic resource in 2004.)