Whenever I travel Alberta for business I try to return to the office with fodder for future blog posts. As the last instalment from my April 2012 business trip, today’s blog post will feature the Big Rock Erratic, near Okotoks and the Leitch Collieries, in the Crowsnest Pass (near Burmis). Both sites are formally protected as Provincial Historic Resources and can be found on the Alberta Register of Historic Places.

Other blog posts stemming from my April travels include:

For those of you wondering if I only write about southern Alberta – don’t worry! At the end of June I will be travelling up to the MD of Opportunity. I wonder what kind of northern Alberta fodder I will discover…. 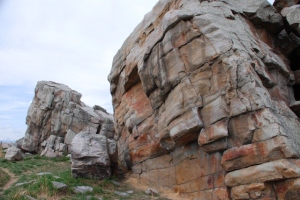 Located off Highway 7, ten kilometres southwest of Okotoks, the Big Rock Erratic is, well, BIG! Measuring 9 metres high, 41 meters long and 18 meters wide, it is the largest rock in the Foothills Erratic Train. Essentially, some 10,000 years ago when the glacier covering the area melted, this rock and others were left behind – far from their mountain origins. Despite erosion, it still serves a huge landmark on the flat prairie.

One interesting feature of Big Rock is the large split down the middle. As shared on our Alberta Culture website, a Blackfoot story describes not only how this may have happened, but why bats have squashed-looking faces:

One hot summer day, Napi, the supernatural trickster of the Blackfoot peoples, rested on the rock because the day was warm and he was tired. He spread his robe on the rock, telling the rock to keep the robe in return for letting Napi rest there. Suddenly, the weather changed and Napi became cold as the wind whistled and the rain fell. Napi asked the rock to return his robe, but the rock refused. Napi got mad and just took the clothing. As he strolled away, he heard a loud noise and turning, he saw the rock was rolling after him. Napi ran for his life. The deer, the bison and the pronghorn were Napi’s friends, and they tried to stop the rock by running in front of it. The rock rolled over them. Napi’s last chance was to call on the bats for help. Fortunately, they did better than their hoofed neighbours, and by diving at the rock and colliding with it, one of them finally hit the rock just right and it broke into two pieces.

When driving along Highway 7, this site is difficult to miss. A large parking lot accommodates travellers and interpretive signs explain the science behind the rock’s presence. To read more about this site, click here.

Note: Quartzite is slippery to climb and although it is hard, pieces can break off in climbers’ hands. Please do not climb the rock, as tempting as it looks. Also, there are aboriginal pictographs on the rock, and these could easily be damaged by climbers. Enjoy the beautiful colours, textures and feel of the rock, but stay on the ground. Please help us protect this Provincial Historical Resource for others to enjoy.

When established, in 1907, Leitch Collieries was one of the largest and most ambitious mines located in the Crowsnest Pass. Initially, a washery and tipple were erected along with railway connections to the CPR. By 1910 a total of 101 ovens were installed. A manager’s residence and a combined powerhouse/round house were also built on site. In an area immediately west of the Collieries, the town of Passburg grew. Ultimately, the coal mined at the Collieries turned out to be of poor coking quality and only five of the 101 ovens were used. Poor quality and economic hard times resulted in the company ceasing its operations in 1916. Most of the buildings in Passburg were relocated to Bellvue (another mining community in the Crowsnest Pass).

Both a Provincial Historic Resource and a Provincial Historic Site, Leitch Collieries is managed by the Government of Alberta as an interpreted historic site. At this site (located just east of the Frank Slide Interpretive Centre on Highway 3), visitors will find the remains of the tipple, powerhouse, coke ovens and manager’s house. Walking paths and interpretive signs allow visitors to explore the buildings and learn about the Collieries operations. The site is staffed from May 15 to Labour Day (10:00am to 5:00pm). After hours, and for the remainder of the year, the site is self-guided.

Unfortunately, my visit to Leitch Collieries was very brief. I quickly walked through the site and photographed some of the ruins. The next time you drive through the area consider pulling off the highway – spend some time wandering the remains and learn about an aspect of Alberta’s coal mining history. To read more about this site, click here.