You have a busy summer ahead? Northern Alberta’s historic sites and museums are ready for you to come and play! While you’re at it, you’ll learn about bugs, machines, fur-traders and even a tragic battle. Take your pick – or even better, pick up the Experience Alberta’s History Pass. It is just $75 for the whole family to enjoy a year of Alberta’s past. 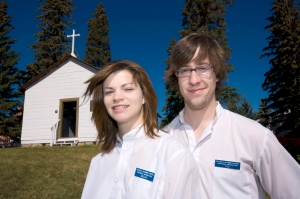 St. Albert’s Father Lacombe Chapel, once a bustling gathering place for Aboriginal people and French-speaking Oblate priests, Grey Nuns and Métis, is Alberta’s oldest building. Join your costumed guide for a tour of the building, grounds and neighbouring cemetery.

One of Alberta’s and Canada’s most significant heritage places, Frog Lake Historic Site commemorates the events of April 2, 1885, when First Nations’ dissatisfaction with federal government policies erupted in violence.  Visitors can walk along an interpretive trail with tri-lingual signage that places April 2, 1885 within its historic context.

Tour the archaeological site and interpretive centre at Elk Point’s Fort George and Buckingham House, where two competing fur trading posts once stood. A fur-clad voyageur will teach you traditional ways to make a fire, where you’ll gather to hear his adventures. By the end of your day, you’ll know all about how settlers and Aboriginal people lived and worked together.

Historic Dunvegan just south of Fairview, was a 19th century fur-trade post and mission. Join your costumed guide to explore the rectory, exquisitely painted church and Factor’s family home, and trace the footsteps of the trappers, traders, missionaries and Aboriginal people who lived there.

Jump as high as you can and you still won’t reach the top of the 150-tonne heavy hauler at the Oil Sands Discovery Centre in Fort McMurray. Big as it is, it pales beside Cyrus, the 850-tonne bucketwheel excavator in the industrial artifact garden outside! While you spend the day playing, you’ll learn a tonne about one of Alberta’s most significant industries.

Know someone who loves machines? Step on the gas and visit the Reynolds-Alberta Museum in Wetaskiwin. Vintage cars, motorcycles, planes, tractors – if you’ve ridden it or dreamed of riding it, they have one here. Tour a 1911 factory and 1920s grain elevator, watch a movie in the 1950s drive-in and check out gigantic early tractors, called Dinosaurs of the Field.

You’ll want a whole day to explore Edmonton’s Royal Alberta Museum. Meet beetles and centipedes in the Bug Room, huddle inside a full-sized tipi and visit the Wild Alberta Gallery to discover what lives in a wetland, a mountain cave and even a tiny drop of water or learn about man’s best friend in the “Wolf to Woof” exhibit.

Bring your mom to Rutherford House in Edmonton. Tour the historical gardens and elegant home of Alberta’s first premier then visit the Arbour Restaurant for an oh-so-refined high tea with scones and raspberry butter.

Kids who love to run will love the Ukrainian Cultural Heritage Village, east of Edmonton. This award-winning open-air museum has over 30 restored buildings, including a sod house, one-room school, blacksmith shop and three amazing churches. If the kids still have energy to burn, play some horseshoes, make crafts or take in a historical demonstration.

The past echoes gently at Victoria Settlement, celebrating its 150th anniversary this year. Discover this enchanting site near Smoky Lake, on the banks of the North Saskatchewan River.  Learn the simple joys of old-fashioned games, and join a costumed guide for a tour of the church and 1864 clerk’s quarters.