The first steps out onto the dome of the beehive kiln are a bit unnerving, with only a thin shell of tightly-fitted bricks supporting a small group of us above the void below. Domes structurally similar to this have been around since antiquity – many notable examples still survive – but it’s reassuring to know that scaffolding inside the kiln will prevent a painful and possibly career-ending collapse.

Kiln No. 2, one of four historic beehive downdraft kilns at Medalta Potteries, is a circular drum roughly ten metres in diameter with brick exterior walls surmounted by the dome and a tall central stack. Encircling the walls are wide adjustable bands of corroding steel which held the kiln together as it expanded and contracted and attest to the rigours of the firing process. Medalta’s beehive kilns historically fired a wide range of ceramic products and now serve as distinctive classroom and exhibit spaces.

END_OF_DOCUMENT_TOKEN_TO_BE_REPLACED

A massive brick chimney at Medalta Potteries towers six metres above the roof of “Building 10” and extends roughly the same distance from the roof to the dusty factory floor below. Two meters wide at its base, the chimney and accompanying boiler were vital in the production of clay products from the early decades of the twentieth century until the plant’s closure in the 1960s. Now a Provincial Historic Resource, Medalta Potteries in Medicine Hat has evolved into a vibrant community hub that includes the Medalta archives and interpretive centre, galleries and displays, a working pottery that reproduces classic Medalta ware, a contemporary ceramics centre for professional artists, and a venue for markets, weddings, concerts and other community events. The tall brick chimney and distinctive monitor roofs of the former factory buildings provide the iconic backdrop for these varied activities.

Already leaning slightly to the south, the chimney developed a worrisome new tilt after the June 2013 southern Alberta floods, an event which inundated much of Medalta and the nearby residential neighborhoods. As soil conditions on site gradually normalized in early 2014, the chimney’s foundation shifted and subsided further into the clay-rich soil, raising concerns about its stability. The only practical long-term conservation option was to disassemble the chimney and rebuild it with the original, locally manufactured brick using traditional masonry materials and construction methods. 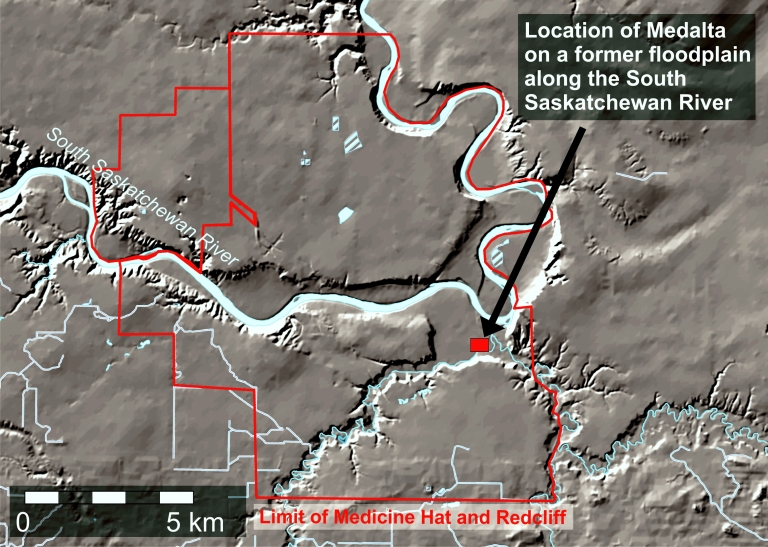 Conserving the chimney started with extensive photographs and measurements followed by disassembly by a contractor specializing in historic masonry conservation. Medalta’s staff archaeologist monitored and documented the process. As the chimney came down brick by brick, unexpected finds within the masonry included an old whisky bottle; fire bricks from Hebron, North Dakota; and a bizarre series of wasps’ nests occurring at roughly one metre intervals within the stack. This corresponds roughly with the work a team of masons would likely have completed in a typical day – a coincidence that begs further explanation. The chimney-dwelling wasps turned out to be quite blind and fortunately did not harass the masonry crew as dismantling proceeded.

The most intriguing relic, however, was a cluster of bricks inscribed with names and the inscription “IX 44”, presumed to represent a date. The names went unobserved until mortar dust from the disassembly process settled lightly onto the brick and highlighted the writing. Prisoners of war interned in Medicine Hat during the Second World War were recruited for work in local industries to offset the wartime labour shortage. Research now underway may reveal that some of these POWs, possibly even masons in their pre-war lives, helped repair the chimney at Building 10 in September of 1944.

Chimney rebuilding is nearing completion and will replicate its historic appearance — without the lean to the south. Glazed bricks set into the chimney mark the locations of the autographed bricks and, soon, visitors to Medalta will be treated to a new exhibit in Building 10 featuring the original bricks and an account of this chapter in the site’s remarkable history.

A community rich in Alberta history – boasting not one but two National Historic Sites of Canada – the City of Medicine Hat recently had two of its designated Municipal Historic Resources listed on the Alberta Register of Historic Places. 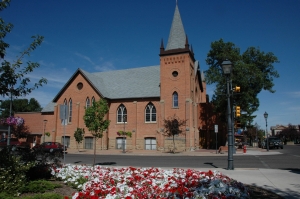 Significant for its status as the oldest church building in Medicine Hat, and the home of the City’s oldest religious congregation, St. John’s Presbyterian Church was listed on the Register in late 2012.

Just this week, another historic place designated by the City, the Merchants Bank of Canada, was also listed on the Alberta Register of Historic Places. Constructed in 1899, the Merchants Bank is valued not only as the first permanent bank branch in the City, but also as an important building constructed of brick, in a city where brick was historically an important and characteristic local material, and brick-making a key industry. 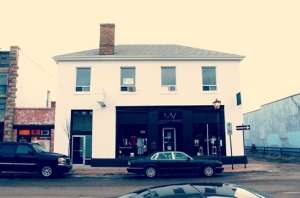 Congratulations to the City of Medicine Hat and the owners of these two properties for being listed on the Alberta Register!

As the Canadian Pacific Railway was planning its route between Winnipeg and Fort Calgary, the decision was made to cross the South Saskatchewan River at a wide valley west of Fort Walsh lush with cypress trees.  Here a station was erected and a townsite subdivided called Medicine Hat after a Cree medicine man.  The surrounding district was soon the domain of numerous ranches, and, during the 1890’s, Medicine Hat emerged as the regional metropolis of a cattle domain.  In 1898, it was incorporated as a town with over 500 people.  By this time, gas reserves were discovered in the district and incentive was provided for industrial development, particularly in pottery.  In the meantime, the city’s streets came to glow from gaslight.  By 1906, Medicine Hat was large enough to be incorporated as a city.  By 1911, its population stood at 5,600.  Contributing to its growth was its comparative isolation, and the conversion of much of the surrounding ranching leases into farmland, which resulted in the emergence of a large farming population in the hinterland. 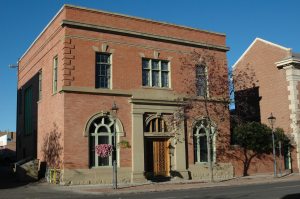 Though the surrounding countryside and growing urban population of Medicine Hat was ethnically mixed, the business elite of the community was primarily British.  The first ranchers had been mainly British, and the new wave of industrialists and real estate developers were also of British origin, primarily immigrants from Ontario.  It was natural therefore that the first City Councils would often contain the same people as the Chamber of Commerce, with names such as Fewings, Tweed, Cousins, Crawford, Milne, Pingle, Sissons, Kealy, Huckvale and Stewart predominating.  It was probably also natural that such people would found a social club, where affairs of common interest could be discussed with less formality and out of the public eye.  Thus, on 21 November 1903, the Cypress Club was incorporated by an act of the Legislative Assembly of the North-west Territories.  Like the Edmonton Club and Ranchman’s Club (Calgary) before it, the Cypress Club was intended to provide a retreat for local business and community leaders to plot the development of the community in an atmosphere of brotherhood and congeniality.  A great incentive was the authority such a private club would have to obtain a liquor license and so provide intoxicants to its members at any time it chose.  As was typical, membership was confined to men.

Three of the first six presidents of the Cypress Club, F.L. Crawford, William Cousins and Charles Pingle, would also be presidents of the Medicine Hat Chamber of Commerce at roughly the same time, while numerous others would also be members of City Council.  To expand its scope, the Club also encouraged membership among the more prominent of the local ranch owners, and also the professional classes, particularly lawyers.  The first president was F. L. Crawford, the manager of the Bank of Commerce, but the tradition would soon be established that the presidency should alternate between City businessmen and district ranchers.

Members of the Cypress Club first met in the Cousins Block in downtown Medicine Hat.  As membership soared, and the Club quickly evolved into the elite social club of the business community, there was incentive and resources to construct a self contained building.  In 1907 therefore, the Club purchased the lot on 218 – 6th Avenue SE in the downtown core and contracted the prominent local architect, William T. Williams, to design a small, but elegant structure of red brick and sandstone to serve exclusively the functions of the Club, or whatever other purpose the Club would choose.  A deal was struck with the Bank of Commerce which gave the Bank the front half of the property on Main Street, while the Club building itself was to be built on the back part, within easy walking distance for most of the local businessmen.  When the design of the $15,000 building was complete, A.P. Burns was contracted to begin construction.  This was done through a loan from Hop Yuill, who would be repaid over the years from membership dues and fundraising activities.

As time passed, the Cypress Club continued to serve the business and professional elite of Medicine Hat and its surrounding district as a men’s social club.  During World War II, it was turned over to the Empire Club for use by armed service personnel stationed in the district.  Occasional internal renovations would occur, and, at times, financing was precarious, but, invariably, members from the business community would come to the rescue with loans.  Members over the years would include most of Medicine Hat’s mayors and members of City Council, several of the districts Members of the provincial Legislative Assembly, and Members of Parliament William Wylie, Bud Olson and Bert Hargrave.  Other members to gain a strong reputation outside the district of Medicine Hat include Judge John Sissons and Edmonton Journal editor Andrew Snaddon.

In 2002, the Cypress Club was designated a Provincial Historic Resource.  Its historical significance lies in its service as the main social club for men in the city and district of Medicine Hat since its inception in 1903.

Visit the Alberta Register of Historic Places to learn more about the heritage value of the Cypress Club. In order for a site to be designated a Provincial Historic Resource, it must possess province-wide significance. To properly assess the historic importance of a resource, a historian crafts a context document that situates a resource within its time and place and compares it to similar resources in other parts of the province. This allows staff to determine the importance of a resource to a particular theme, time, and place. Above, is some of the historical information used in the evaluation of the Cypress Club.

The Municipal Heritage Partnership Program (MHPP) provided a training session for the City of Medicine Hat’s Heritage Resources Committee on Friday, March 18, 2011. The meeting took place at the Esplanade Arts & Heritage Centre in downtown Medicine Hat, and focused on expanding the Committee’s capacity to evaluate the City’s places of heritage interest. Matthew Francis, Manager of Municipal Heritage Services for Alberta Culture and Community Spirit, presented on “Values-Based approaches to Heritage Resource Management,” as well as on “Understanding and Using Statements of Significance.” Case studies of four potentially significant places in Medicine Hat were explored during the workshop. 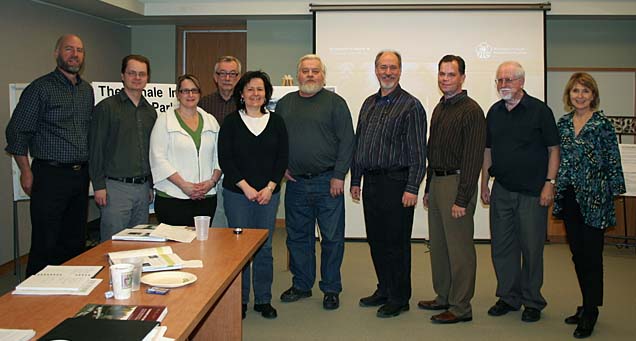 Formed in 2009 by Medicine Hat City Council to advise on issues relating to heritage conservation, the Committee has enthusiastically embraced its task. Already, the Committee has provided valuable advice relating to the 2010 designation of Medicine Hat’s first Municipal Historic Resource – the Hargrave-Sissons Block. Heritage Advisory groups like this are being developed by municipalities all across Alberta, and MHPP staff are available to provide orientation and training to acquaint communities with “best practices” in heritage conservation.