Every summer around this time of year, I look forward to checking out the sights and sounds of Edmonton’s local exhibition formerly known as Klondike Days. Its very name conjures childhood memories full of non-stop carnival rides, piping hot corn dogs and the sweet smell of freshly spun cotton candy. The name Klondike Days was originally brought in by exhibition organizers in the 1960’s and the Klondike gold rush theme was enthusiastically embraced by the public. I’ve always wondered what our local historical connection to the gold rush really was. Is there really gold to be found in the river valley?

It turns out that mining for precious metals within our River Valley has had a long history. Local mining activities may even predate the discovery of gold in the Klondike. Tradition is that in the spring of 1859, James Hector of the Palliser Expedition was shown samples of gold found in the gravel deposits along the North Saskatchewan River. The news of this discovery spread to prospectors passing through Edmonton on their way to British Columbia’s Cariboo goldfields, triggering the beginning of a local gold rush. However, Hector’s report in the Papers of the Palliser Expedition does not contain any mention of gold along the North Saskatchewan River. Regardless of the questions surrounding Hector’s involvement, there was gold to be found in local gravel deposits. One of the first prospectors to mine the alluvial deposits was Thomas H. Clover, whose name lives on locally as the districts of Clover Bar and Cloverdale. Over the next twenty years, about a third of the prospectors travelling to the Cariboo stayed to try their luck in the Fort Edmonton area, and settled down in Miner’s Flats.

Deposits of precious metals, like gold and platinum, can be found in alluvial deposits (sands and gravels) in modern or ancient river beds, and occasionally glacial deposits. The gold found in the North Saskatchewan River occurs as flakes that are so small, they are commonly known as gold flour. No larger than 0.5 millimetres, these particles can be found mixed in with the rivers fine grained sands and gravels. Because the gold flour flakes are tiny, they are easily transported by the powerful flowing waters of the North Saskatchewan River from their sources. Gold flour then accumulates along the Edmonton’s River Valley in places where the rivers velocity decreases dramatically. Although there are no nuggets to be found in the North Saskatchewan River, recreational miners can still be found panning for gold along the gravels bars in Edmonton’s river valley. Gold mining activity in the Edmonton area peaked between 1895 and 1897. It’s estimated that over 300 miners arrived to work the sand bars along a 100 km stretch of the river upstream and downstream of Edmonton. 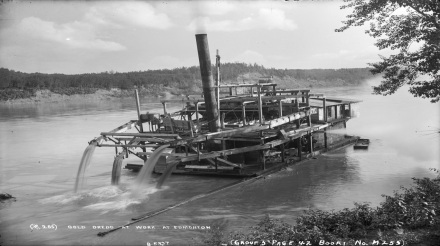 Steam-powered gold dredge at work along the North Saskatchewan River, 1898. Source: Provincial Archives of Alberta, B5327

Gold dredge at work along the North Saskatchewan River, ca. 1890. Source: Provincial Archives of Alberta, B5332

Gold dredges were used to extract placer gold from the sand and gravel deposits along the river. Although complex in appearance, many being large and multistory structures, the majority of dredges were based on simple gold washing concepts. The gold, being much heavier and denser than its surrounding material, settled to the bottom and was left behind as the dirt, sand and rocks are washed away. On the dredges, buckets scooped up the gold bearing materials, dumping them into sluice boxes, and water was then pumped on board to separate the gold from the gravel, the gold was captured in the sluice boxes while the worthless gravel was dumped back outside into the river. At the height of the gold rush in Edmonton, wealthy entrepreneurs used large steam powered dredges to dig up the river bed in search of valuable precious metals. The monstrous looking contraptions enabled miners to separate gold from other alluvial sediments and extract up to 2 oz. of gold per day from gravels bars throughout Edmonton’s River Valley. By 1898, gold mining activity slowed substantially along the North Saskatchewan River Valley as miners moved northward to join the more lucrative Klondike Gold Rush in the Yukon.

Despite the short life and limited quantities of gold recovered in the Edmonton region, North Saskatchewan River gold did enjoy a notable moment in the spotlight. On September 3, 1912, the Governor General of Canada, HRH the Duke of Connaught, officially opened Alberta’s new, and still unfinished, Legislature Building. He did so by “unlocking” the front doors of the building with a ceremonial key made of “Saskatchewan River gold.” This ceremonial gold key went missing almost immediately after the opening ceremony and despite many efforts by research staff of the Legislature Library to track it down, it has never been relocated. When the opening ceremony was re-enacted to celebrate the Legislature Buildings 100th anniversary, a replica key was used. This key resides today in the artifact cabinets of the Legislature Library.

Huck, Barbara and Doug Whiteway. In Search of Ancient Alberta: Seeking the spirit of the land. Published by Heartland Publication Winnipeg Canada, 1998.

Godfrey, JD et al. Edmonton beneath Our Feet: A Guide to the Geology of the Edmonton Region. Edmonton Geological Society, 1993.

Perry, Sandra, et al. The Mantle of Leadership: Premiers of the North-West Territories and Alberta, 1897-2005. (Edmonton: Legislative Assembly of Alberta, 2006).

2 thoughts on “Edmonton’s River Valley: The Glitter of the Gold Rush”