The Quaternary Palaeontology program at the Royal Alberta Museum (RAM) works with stakeholders in the sand & gravel industry to recover and preserve the Ice Age fossil record of the province. As the source of thousands of the fossil specimens housed in our collections, the sand & gravel industry provides the basis for significant scientific collections, research, outreach, and exhibits. The working relationship of the RAM and the sand & gravel industry originates in the late 1980s and 1990s, when museum staff began active efforts to engage companies and their staff, most notably in gravel pits in the Edmonton area. Those efforts manifested in a number of formal (e.g., regulatory processes) and less formal ways (highlighted here), all with the intent of maximizing the recovery of fossil remains while minimizing impacts to industry.

Shortly after arriving at the Royal Alberta Museum in 2008, I set up a meeting with Lafarge, a company with considerable sand & gravel interests. My intent was to rekindle the working relationship with Lafarge that was established by my predecessor at the museum. As a naïve scientist, I anticipated a low-key conversation regarding fossils in gravel pits. I walked into a meeting with seven people from Lafarge, including legal, and I quickly realized that from the company’s perspective, someone from government calling about fossils in their gravel pits could have significant ramifications for their business. I’m happy to say that the meeting went well and we continue to work with Lafarge, including recent participation in an outreach event at their Berrymoor Pit. That initial meeting was a learning experience that helped shape our current approach when collaborating with industry and their staff working in sand & gravel pits.

Ice Age fossils are thinly distributed among large volumes of gravel and they don’t look much different than bones you might see in a farmer’s field. Unlike dinosaur fossils in Alberta, the Ice Age fossils are mostly unaltered, non-petrified bone, and getting folks to separate an Ice Age fossil from an old cow bone can be challenging. This is where context is important. An old bone in a field is likely something that died recently. An old bone dug up from under 30 feet of gravel is likely much older—on the order of thousands of years!

In an effort to raise awareness about Ice Age fossils, we regularly visit gravel pits that are producing fossil remains. We have sand & gravel staff with us on those site visits and we regularly invite sand & gravel staff to tour our collections. This helps familiarize industry staff with Ice Age fossils and gives us a chance to discuss what to do when something is found. 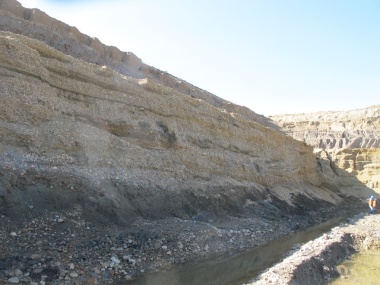 Brock Helm (Mixcor) looking for fossils with us in one of his company’s gravel pits.

In an ideal world, researchers want to see fossils in place, exactly where they were buried. In reality, most fossils aren’t often seen until later stages of work at sand & gravel pits. Several thousand specimens in the RAM collections were salvaged post-excavation by Gene Seal, who worked in Edmonton-area gravel pits pulling clay balls off of the shaker decks before they entered a rock crusher. He also grabbed Ice Age fossils, eventually donating them to the RAM and forming a strong core of its collection of Ice Age fossils from the Edmonton area. In many respects, what Gene did is what we ask of industry in terms of self-regulation: if you see a bone/fossil, set it aside so it doesn’t end up being crushed, and then call us.

Over forty-five thousand years ago, a large-horned bison with northern origins roamed the area now occupied by Edmontonians. He traversed ground occupied by animals that exist only as memories in the fossil record—giant ground sloths, short-faced bears, and mammoths. The North Saskatchewan River’s path was different, wandering the landscape in a pattern not quite the same as the river valley familiar to most Albertans.

Thousands of years later, in 2011, a staff member working in an Edmonton-area gravel pit saw an object that differed markedly from the stream-rounded cobbles and sands that he was excavating. His curiosity drove him to collect the object and return home with it. In turn, the object piqued the interest of his wife, who contacted the Royal Alberta Museum to see if it could be identified.

After a few phone message transfers and emails, I was on the phone with Nathalie discussing the find that her husband had made. There was some trepidation, as there often is with the discovery of fossil remains. People who find fossils are often afraid that they will be in trouble for picking them up and as alluded to above, people working in sand & gravel have concerns that the discovery of fossil remains may have a negative impact on their livelihood. I can’t count the number of times that I’ve been asked “Will we be in trouble for picking up a fossil?” or “If something is reported, will we be shut down?” (The answer to both is generally no). To ease Nathalie’s concerns, I indicated that I was happy to look at the fossil without information about where it came from.

The bison skull was one of the largest that I’ve seen, with horn cores extending outward to a much greater width than in living bison. After much discussion, I made two requests to Nathalie: 1) to ask her husband to set aside any other bones that he finds while working, so they don’t end up getting crushed, and 2) to please ensure that the bison ends up at the museum at some point.

Later in 2011, Nathalie and her husband visited us at the museum and brought with them approximately 50 additional Ice Age fossils for the museum, but they wanted to hang on to “Buck” a bit longer. Although fossil resources in Alberta are considered Crown Property and technically should come to the museum right away, people are genuinely excited and enthusiastic when they find something. In the case of “Buck” and similar finds, there is value in the collector being able to share that discovery and the information we provide with other folks. I told Nathalie that she would be considered the temporary custodian of the fossil, and that when she tired of dusting it, and people stopped asking to see the bison fossil, that it would be a good time for “Buck” to come to the museum. I periodically emailed her about the fossil, and in 2014, “Buck” came to the museum. We’ve since radiocarbon-dated him and learned that he’s more than 45,000 years old. In my opinion, “Buck” is a really nice example of how some of our informal Historic Resource Management approaches work well, and his journey isn’t quite over—he may “reappear” on the landscape when the new museum opens later this year.