Tomorrow is Aboriginal Veterans Day. It is estimated that more than 12,000 First Nations members, Inuit, and Métis served in WWI, WWII and the Korean War.

At first glance, the voluntary participation of several young Niitsitapi (Blackfoot) men in the First World War appears to confirm their assimilation into Euro-Canadian culture. Recent graduates of prototype residential schools, they shunned requests by their elders to remain in Treaty 7 territory and were inspected, inducted, drilled, and disciplined. Many were sent overseas to fight for God, King, and Country. Some were killed in action. We might interpret a 1917 letter home from Siksika (Blackfoot) soldier Mike Foxhead as an indication of his acceptance of colonial values. He wrote:

I’ll stick to it until the end to put up a name for the Reserve, so they can say that they have one of their boys over here. I could have got out of it when the other boys got their discharge only I wanted to do my bit like all other Canadians. I knew that somebody had to go and fight for the Empire, and I made up my mind that I would go because it would be my duty sooner or later.[1]

Yet as historian James Dempsey has shown, there were important elements of Blackfoot warrior culture that accompanied Blackfoot mobilization during the Great War.[2] As the nineteenth-century waned, so too did opportunity for young men to prove themselves in battle, raid their enemy’s camps for horses, and recount their own victories on hides and in ceremonies. The First World War offered opportunity for young Blackfoot men who, despite the best attempts of missionaries and Indian agents, retained an understanding of what it was to be a warrior in the days of the buffalo. Yet in the days of chlorine gas, shellfire, and modernizing bureaucracy, there was much suffering to bracket moments of glory on the battlefield. Examination of Blackfoot experiences in the First World War reveals soldiers who could operate in and understand imperial, national, and indigenous worlds all at once.

After much confusion on the part of the departments of Indian Affairs and the Militia, recruitment of indigenous people in Canada began in earnest in the spring of 1916.  In late January 1917, Captain Norman S. Rankin of the 191st Battalion promised that if enough Siksika men enlisted they would form a platoon under indigenous command.[3] Fourteen men went to Calgary to volunteer, but only eight of them were deemed medically fit. Of the young men of the Siksika, only Mike Foxhead served overseas. He was killed in action during the Battle of Passchendaele. Nevertheless, the rejected and discharged Siksika men reportedly sang “It’s a long way to Tipperary” as they returned to the reserve. [4] Some twenty-nine First Nations men from Alberta enlisted, including seventeen from the Kainai reserve.[5]

Perhaps the most well-known Kainai soldiers are the Mountain Horse brothers. Joe, Albert and Mike were graduates of St. Paul’s Anglican Boarding School and participated in its cadet program. It seems that the Reverend Samuel Middleton, principal there from 1909-49, was particularly devoted to a martial vision of the British Empire. The cadet corps introduced young men to uniforms, drill and marksmanship. Aside from preparing them for military service, such skills stood men in good stead to work as scouts or translators with the North-West Mounted Police. Canon Middleton facilitated their placement there. His 1931 recommendation letter for Harvey Tail Feathers noted the young man was a sergeant in the cadet corps, an athlete, and played the cornet.[6]  Both Joe and Mike Mountain Horse worked for the Mounties. 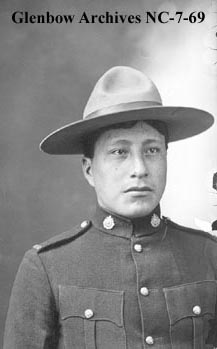 Joe Mountain Horse served with the Northwest Mounted Police before the First World War. Overseas he served with the 50th Battalion and was injured numerous times suffering a life-long disability as a result. Glenbow Archives NC-7-69.

The pages of the register at St. Paul’s at the Glenbow Archives do not contain many details on the pupils, often just listing the bands they came from, or recording notes on their health if it was poor (as it was for many), but they do proudly list details of service in the military and cadets. The institution had a long impact in indoctrinating Blackfoot in Anglo-Canadian martial culture. In the 1920s, some veterans like Nick King and Joseph Mountain Horse signed their own children up in the school, and in the Second World War, a number of former St. Paul’s cadets served in the armed forces.

Despite these connections to St. Paul’s School, its graduates were certainly not simply products of assimilation who had removed themselves from the Kainai worldview. British imperial militarism coexisted and blended with Blackfoot ways of knowing. Mike Mountain Horse was to write, “it must be confessed that the powerful sway of the new was not sufficient to entirely dethrone the many spirits to whom we had previously made our offerings.”[7] A major aspect of his memoir, My People the Bloods, was a hope to set the record straight on Blackfoot culture. When Mike’s brother, Albert Mountain Horse died of sickness after fighting at the Battle of 2nd Ypres, Mike recalled that a spirit of revenge which he associated with his forefathers motivated him to enlist.[8] Mike remembered letting out his own war song during a particularly frustrating period in the trenches overseas and later had his war exploits recorded on a hide, much like his ancestors.[9]  Other material displays of indigeneity included George Strangling Wolf’s modified uniform at Sarcee Camp, replete with elk teeth earrings and necklace.[10]  Strangling Wolf was to be gassed at Lens in 1917 and sent home. Private Nick King of the 50th Battalion, a graduate of St. Joseph’s Industrial School, brought his traditional regalia overseas with him and wished to bring his own beaded jacket overseas to France. [11] His father, Bumble Bee had attempted to enlist as well, but he refused to cut his hair, and was struck off strength. Mike Mountain Horse recalled that during the, “dark days of 1917 when the Germans were having things pretty much their own way”, George Strangling Wolf made an offering of a small portion of his skin, praying, “Help me, Sun, to survive this terrible war, that I may meet my relatives again. With this request, I offer you my body as food,” and buried a piece of flesh cut from near his knee.[12] Self-mortification, the cutting of a piece of flesh, was a ritual that had long been performed at the sun dance, a ceremony central to the Blackfoot way of life.[13] 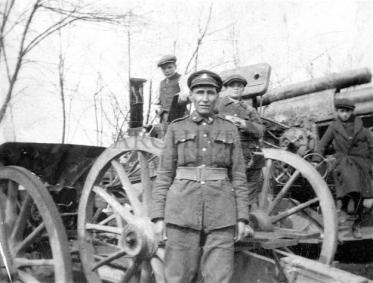 Despite the attempts of residential schools to assimilate Niitsitapi children into Euro-Canadian culture, the experiences of First World War Blackfoot soldiers suggest that their indigenous culture was by no means erased. The young men that volunteered to fight in the First World War understood the world of Union Jacks and khaki, but also interpreted this world and their place in it through Blackfoot ways of knowing.

Written By: Will Pratt, Historian

One thought on “Blackfoot Soldiers in WWI”