In 1905, the Canadian Northern Railway completed a line between Lloydminster and Edmonton. As it did so, vast areas of open parkland between the two centers became immediately viable for homesteading.  As the incipient farms spread out from the rail line, tiny farming communities sprang up to serve them.  One of these was called Dewberry, 50 km northwest of Lloydminster, where a store and post office was erected in 1907.  Among the settlers in the district was Lee Green from Illinois, who filed for a homestead on NE26 TP54 R4 W4, 10km north of Dewberry, in 1909.  He also took two quarters with South African scrip four miles to the north of this, and proceeded to prove them up before returning to Illinois to marry Aleta Fleming in 1912 and bring his bride back to his farm north of Dewberry where they intended to develop it and raise a family. 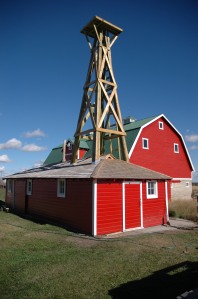 Before long, Lee and Aleta began to expand their farm.  During the next several years, they also raised four children.  Lee was a progressive mixed farmer, apparently bringing the first gasoline powered breaking outfit to the area.  He also brought in a highly valued stock of purebread Belgian horses, and built up a large herd of Aberdeen Angus cattle.  As his farm expanded, he required more land, so he purchased all of section 23 TP54 R4, just to the south, from the CPR.  It was on the southwest quarter of this section that he centered his operation during the 1920’s, having several buildings erected over the course of the next two decades, including a house, a large barn, a separate pig barn, a blacksmith shop, a machine shop, and a separate residence for hired help.  He even built a teacherage for teachers of the nearby Riverton School in 1948.  By this time, the farm became a model for the district, which had become known as Greenlawn, and the farm Greenridge.  The viability of the expanded operation had been given validity by the extension of a CPR line through Dewberry in 1927.

Being among the more prominent residents in the district, Lee and Aleta were active in community affairs, especially musical, for they were both musicians.  They were also both prominent parishioners of the local United Church.  Lee was active politically as well, being involved in the local branch of the United Farmers.  In 1949, he would run, unsuccessfully, as a CCF candidate in the federal election for the riding of Battle River.  Lee and Aleta remained on their farm, passing away in the 1960’s.

By this time, the operation had been taken over by their son, Harlan.  Because of its size and the innovations introduced by Lee and others, and the contributions of the Greens to the district, it continued its status as a model farm.  On 16 February 2006, it was designated a Provincial Historic Resource.

Visit the Alberta Register of Historic Places to learn more about the heritage value of the Greenridge Farm. In order for a site to be designated a Provincial Historic Resource, it must possess province-wide significance. To properly assess the historic importance of a resource, a historian crafts a context document that situates a resource within its time and place and compares it to similar resources in other parts of the province. This allows staff to determine the importance of a resource to a particular theme, time, and place. Above, is some of the historical information used in the evaluation of the Greenridge Farm.

3 thoughts on “Greenridge Farm, near Dewberry”