Adornment reflects a symbolic visual language that includes materials and designs that contain communally understood messages. That is, the clothing or items we wear convey information about us to other people. The expression of these messages through clothing, tattoos, jewelry, or body paint, conveys information about an individual, group, society, or religion. Beading, and other embroidery techniques, can be seen as one aspect of adornment for Indigenous groups, and one that played a central role in cultural preservation for many groups post-European contact.

Beads have been found in the archaeological record as early as 40,000 years ago, and are staples in decorative adornment. Beads can be fashioned from many different natural materials including plant seeds, stone, gems, shell, bone, or metal. While plant-based seeds are the easiest to manufacture due to their availability, beads made from bone, metal, gems, or semi-precious stone require more effort and technology to produce, and are therefore more highly valued.

Prior to European contact, Woodland and Plains cultures of North America decorated the skins of animals, tree bark, and their own bodies with locally available and traded materials. Materials such as seeds, berries, porcupine quills, moose hair, plant fibre, bone, red jasper, shells, pearls, and copper have been documented across North America as common decorative resources. Exotic or rare materials were seen as prestige items, and a diverse network of trade routes facilitated the movement of rare materials across the continent. Plant-based dyes and mineral paints allowed a diverse range of colour to be applied to the raw materials. Black was made from charcoal, yellow from alder bark, red from currants or red ochre, and blue from blueberries. These were incorporated into geometric and linear patterns on baskets, footwear, and clothing.

While beads were present in Pre-Contact North America, they were not the principal medium of adornment, especially in the north. In addition to traditional beadwork, moose-hair embroidery and quillwork were important adornment techniques to Indigenous groups living in the Woodlands, Arctic, and Plains. Quillwork is a distinctly North American form of artistic expression created by the Subarctic, Great Lakes, and Eastern Woodlands peoples. Each region developed its own styles, colours, and sewing techniques in order to fasten the quills to hides. Often this included soaking and boiling the quills with plant substances and iron-holding clay, which softened the quills. They were then flattened and attached to hides with wrapping, weaving, or appliqué techniques. While this form of adornment was eventually replaced by beadwork, it still remains an important decorative technique used in contemporary work.

During the fifteenth and sixteenth centuries, French and English traders introduced glass ‘seed beads’ to First Nations groups. These quickly became the principal medium circulating to the First Nations along the St. Lawrence and Mississippi Rivers due to their varied colours, availability, and the concurrent introduction of trade cloth and steel needles. Steel needles, trade cloth, and glass seed beads represented hours of time savings for Indigenous craftspeople, as these required much less preparation prior to their transformation into clothing, and the relative ease of embroidery on cloth compared to hide. Beadwork quickly rose to become the predominant craft, resulting in a decline of more traditional decorative techniques such as quillwork.

The culture clash between Indigenous and European peoples also left an impact on the designs used for beading. While geometric and nature-inspired designs dominated Pre-Contact bead-craft, the influence of French and English flower designs such as chintz or calico on imported textiles resulted in changes to Indigenous patterns. New embroidery techniques taught to Huron and Iroquois girls by Ursuline nuns beginning in the seventeenth century also facilitated changes to traditional styles. The patterns produced by the Huron and Iroquois reflected a combination of European needlework and Indigenous curvilinear designs, which then diffused to their western neighbours. The floral style moved westward with the fur trade, often replacing earlier geometric traditions.

Due to the loss of their traditional lands, and with it their subsistence base, the selling of art became an important source of income for Indigenous peoples. This further influenced the patterns and styles of beadwork, as the motifs and patterns were tweaked to suit a more European taste. During the nineteenth and twentieth centuries, Indigenous craftspeople exploited the desire of Europeans for ‘exotic’ goods produced by Indigenous peoples. Non-traditional items were created for sale to a European audience reflecting a Victorian consumer such as cigar cases, tea cozies, chair seats, or whisk broom holders.

Cherokee moccasin, 1815-1840. Exhibit in the Bata Shoe Museum, Toronto, ON, Canada. Public Domain. Photography was permitted in the Museum without restriction. https://commons.wikimedia.org/wiki/File:Cherokee_moccasin,_1815-1840_-_Bata_Shoe_Museum_-_DSC00632.JPG 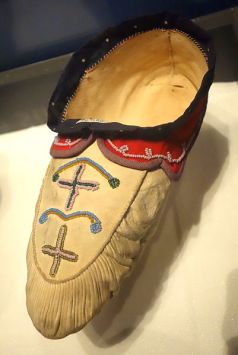 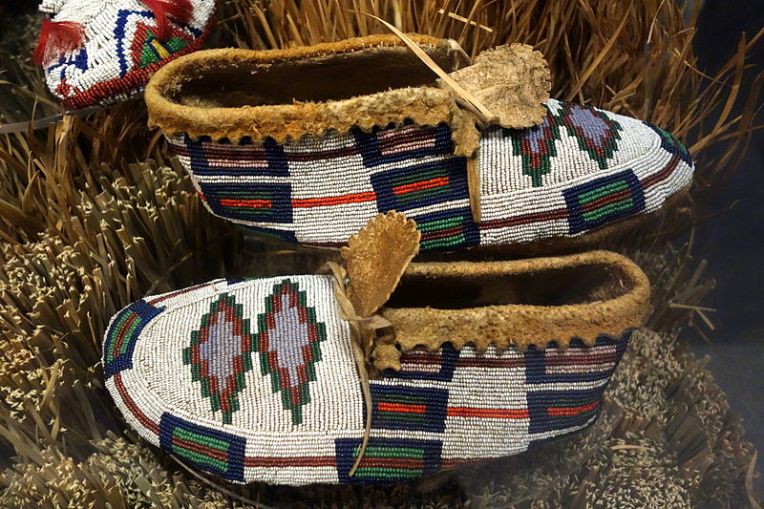 Ruth Phillips, in Trading Identities: The Souvenir in Native North American Art from the Northeast, 1700-1900, offers several explanations as to why Indigenous people gravitated to floral designs post-contact, and how European officials – set out to ‘civilize’ Indigenous groups – missed the encoded social, spiritual, and cultural imagery embedded within the floral images. One of the explanations Philips provides is that flowers communicated different cultural points of view, such that Victorians associated flowers with femininity and submission, while Indigenous peoples connected flowers to their spiritual and cultural values of nature. While Euro-Americans may have viewed the adoption of floral designs as Indigenous groups becoming more ‘civilized’, Indigenous artisans were able to preserve social, spiritual, and cultural messages within the floral images. Stylistic choices such as symmetry, the colours chosen, and the representation of specific plants are directly connected with important Indigenous values, but from a European view, these choices did not hold any meaning. This disconnect between cultural viewpoints created an opportunity for Indigenous peoples to retain and pass along their teachings and beliefs through encoded meaning in beaded designs.

Beadwork and other Indigenous arts reflect an indivisible part of their culture, and present a unique economic opportunity that works towards cultural survival. While the transition to floral designs and the creation of items for sale to European consumers has historically been viewed as a symbol of traditional loss, their production is now understood as crucial in their quest for economic and cultural survival.

If you are interested in learning more about beadwork and moccasins, the Musée Héritage Museum is holding a temporary exhibit from August 21-October 21, 2018 titled “In Their Footsteps: A Century of Aboriginal Footwear in the Canadian West”. Click here for more details. http://museeheritage.ca/whats-on/exhibitions/

One thought on “Beading the Way: Adornment and the Quest for Cultural Survival”