Thank you to guest authors, Margaret Patton and Shalcey Dowkes, for this interesting post about shell beads from a unique archaeological site in Southern Alberta.

The authors would like to acknowledge the Siksika Nation and Blackfoot Crossing Historical Park in their support for the ongoing archaeological research at Cluny Fortified Village.

All over the world beads have been manufactured for adornment in jewelry and clothing, trade, and may have even been used in storytelling and gaming. In North America, Indigenous groups in extensively traded marine shells. On the Plains, freshwater clams from local rivers were also used to manufacture beads. However, there are limited examples of freshwater shell beads found archaeologically on the Northern Plains. Over 1,450 pieces of shell have been recovered from the Cluny Fortified Village archaeological site, making it a prime candidate to study the production of beads on the Canadian Plains.

The Cluny Fortified Village Site is unique as the only known fortified village on the Northern Plains. Located on the northern bank of the Bow River, the site contains cultural patterns that are not commonly seen in precontact Alberta including a fortification ditch enclosing a series of pits. Both the Blackfoot and archaeologists consider the occupants of the Cluny village to be a group who migrated from the east and settled in Blackfoot territory around 1700 A.D.

The Blackfoot introduced archaeologists to the site and the first excavations took place in 1960. Early interpretations hinted towards a possible connection to the Middle Missouri area of the Dakotas. However, our recent interpretations suggest the occupants were not from the Middle Missouri area or Blackfoot cultural groups, although there is evidence of interaction between the occupants and the local Blackfoot people. In 2007, excavations resumed at the site in the form of a technical field school run through the University of Calgary. This would later expand to a public archaeology program in 2014 and a youth engagement program in 2016. Excavations at the site are ongoing.

During the peak of the site’s occupation, it was a hub of daily activities that can be seen in the material remains left behind. Activities at the site included tool making, butchering and food preparation, shell and bone bead making, and pottery production. Our current understanding of the site is of a peaceful trading village occupied by family groups who utilized their surrounding environment and interacted with the local populations. Ultimately, we do not know for certain who these people were, why they came here, or why they left.

Although Alberta rivers may not come to mind as a source of clams, there are six species of large, freshwater clams native to the province. These clams can be up to 20 centimeters long, 10 centimeters in height, and 7.5 centimeters in width. Smaller “fingernail” clams (with shells smaller than 2.5 centimeters in length) are also present, but their shells tend to be too thin and fragile to produce beads.

Of the six species of large clams native to the province, only two species have shell walls thick enough to be used for bead making: Lampsilis radiata siliquoidea (Fat Mucket) and Lasmigona complanata (White Heel Splitter). The Fat Mucket and the White Heel Splitter have an average shell thickness of about 1 cm, allowing enough material to make 4-6 beads from each clam. These species reach maturity in approximately 6 years and have long life spans, resulting in wild populations with a high number of large-sized adults. However, clams are sensitive to environmental changes and their long maturation period means populations cannot quickly recover from disturbances.

Fat Mucket and White Heel Splitter are the two species of clams identified in material from Cluny Fortified Village. Generally, the umbo region (hinge) of the clam can be used for species identification if distinctive characteristics are present. However, species identification is difficult due to the similarities in morphology between species.

Bead making would begin with the bead maker collecting freshwater bivalve clams from a nearby river. As Cluny Fortified Village is located less than 500 meters from the Bow River, we expect that much of the shell found at the site was collected from the Bow.

After opening and cleaning the shells, they were broken into pieces approximately the shape of the bead being made. Each clam provided enough material to make 4-6 beads, depending on the size of the clam, the size of the beads, and the bead maker’s skill. These undrilled pieces of shell are called “bead blanks.” The production of bead blanks results in a large amount of small shell pieces that are not usable for making beads. Bead making at Cluny Fortified Village is visible archaeologically through the over 1,450 pieces of shell recovered from the site.

After the bead blanks were roughly shaped, most often they would be drilled with a stone drill before the outside edge was finished. However, a few shell artifacts have been found at Cluny with finished edges and no central perforation. These artifacts may be undrilled, unfinished beads, or they may not be beads at all. Many First Nations people used gaming pieces with one side marked and another unmarked. The bead blanks with finished edges could have been used as gaming pieces, with the outer shell marking one side and the inner nacre layer marking the other side.

Our experiments with drilling shell showed that a piece of leather was necessary to keep the bead blank from spinning under the drill pressure. Most beads at Cluny Fortified Village were drilled first from the inside nacre layer and often finished by briefly drilling from the outside to even out the hole. Drills were mounted on a shaft, with the bead maker spinning the drill between their hands while exerting downward pressure to help it bite into the shell. This method of drilling produced distinctive, regular stepping around the hole. The edges were then sanded to make the final shape of the bead. The most common bead shape found at Cluny are disc beads (27 complete, finished disc beads have been found – only 15 beads make up all the other finished bead shapes). 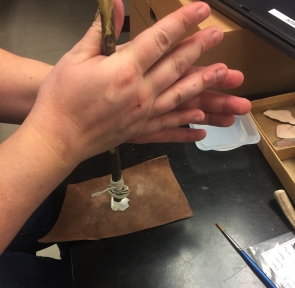 Lithic drills found at the Cluny Site. If these drills were used to drill shell beads, they would have been mounted on a shaft. For each pair of images, the left image is one side of the artfiact and the right image is the other side. 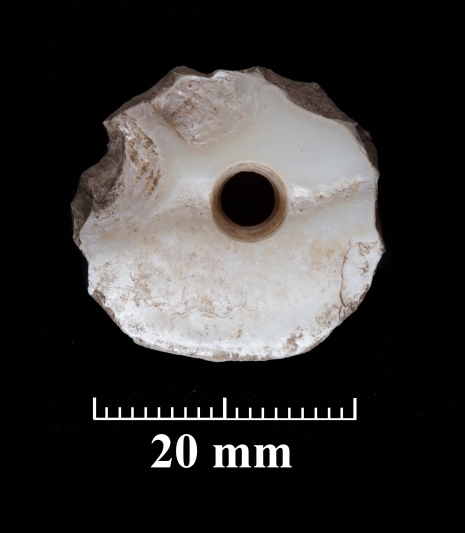 Bead with unfinished outside edges.

Freshwater shell beads have been found at other archaeological sites and were used for several thousand years on the Northern Plains. The use of freshwater beads appears to end with the arrival of Europeans and glass trade beads. The Cluny site is very unique, not only because it is a fortified village, but also because of the opportunity it presents to learn about freshwater bead production. There is very little evidence of bead production beyond the Cluny site, making it one of the only known sites on the Plains to offer a glimpse into the practice of shell beadmaking. We hope to learn more about precontact use of freshwater shell as research at the Cluny site continues.