In 1909, Premier Rutherford of Alberta announced a program of vast railway expansion in the province, offering bond guarantees to major railway companies to build branch lines in districts where they seemed warranted.  The railway company to undertake the greatest extent of track as a result of this was the Canadian Northern, which had arrived in Edmonton directly from the east in 1908, and was soon to extend its track north to Sangudo and Athabasca and west into British Columbia. 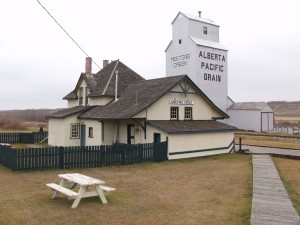 Other Canadian Northern lines were built in the southern part of the province.  One of the more significant of these was between Stettler and Camrose, and was completed in 1911, opening up new farmland for settlement.  As was its practice, the Canadian Northern erected stations at key points along the line, and, in some cases, townsites were subdivided.  This was the case with Meeting Creek, which was located in a district that had already been settled, largely by farmers from the United States.  When the railway came through, the tiny community, established in 1905, was moved five miles to be included in the new townsite.

Being less than 18km from the larger farming centers of Donalda and Bashaw, and 30km away from Camrose, Meeting Creek never grew to sufficient size to be incorporated.  It did, however, possess most of the amenities of a prairie farming community, including stores, garages, livery stables, a blacksmith shop, a bank, a hotel, and, eventually, three grain elevators.  It also had a small, but busy, railway station, constructed in 1913.  This was a two-story structure with a warehouse attached.  It was subdivided into an office, waiting room, freight house, and living quarters for the station agent and his family.

Life in the community of Meeting Creek evolved around the businesses along Main Street, which ran perpendicular to the station, and the station itself.  All passengers and incoming and outgoing freight were handled by the station agent, including the export of grain.  The agent was also the district telegrapher.

When the Canadian Northern was merged with the Grand Trunk Pacific Railway in 1919 to form Canadian National, many small branch lines were closed down in Alberta, but the Camrose – Stettler line remained open, as sufficient agricultural products were being shipped out from the district in between to warrant this.  By the 1960’s, however, improved highway traffic saw the closure of train service in Meeting Creek, although the Camrose – Stettler branch line would remain operating until 1997.

Being that there was little development in Meeting Creek in the years after the railway station was closed, the structure managed to survive, along with the Alberta Pacific Grain Elevator, and, in 2008, it was designated a Provincial Historic Resource.  Today it is an integral part of the Canadian Northern Society’s tour of significant rail sites.

Visit the Alberta Register of Historic Places to learn more about the heritage value of the Canadian Northern Railway Station in Meeting Creek. In order for a site to be designated a Provincial Historic Resource, it must possess province-wide significance for either its history or architecture. To properly assess the historic importance of a resource, a historian crafts a context document that situates a resource within its time and place and compares it to similar resources in other parts of the province. This allows staff to determine the importance of a resource to a particular theme, time, and place. Above, is some of the historical information used in the evaluation of the Meeting Creek railway station.