In the spring of 1909, Premier Rutherford of Alberta announced his government’s commitment to a vast program of railway expansion in Alberta.  To do this, the government offered to guarantee the bonds of major railway companies to the extent of $20,000 per mile of completed track.  Taking advantage of this, the Canadian Northern Railway decided to incorporate several subsidiary companies to undertake specific lines in Alberta.  One of these was the Alberta Midland, which was chartered by the provincial government in May 1909 to build a line from Vegreville south through Drumheller to Calgary.  One purpose was to open up new land for farming, another was to tap into the coal reserves around Drumheller which had hitherto been unavailable to the Canadian Northern or any of its subsidiaries. 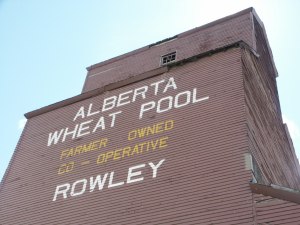 By the end of 1911, the Alberta Midland line was completed.  Along it, several stations were built.  One of these, 25 km north of Drumheller, was named Rowley, after the Manager of the Calgary branch of the Canadian Bank of Commerce.  The Bank itself had provided substantial backing to the Canadian Northern.  Behind the station, a townsite was subdivided, and, before long, a community evolved, the main purpose of which was to provide services to the surrounding hinterland where mixed farming was the staple economy.

It was essential therefore that Rowley be provided with grain elevators, and, in 1915, the first one was built by the Home Grain Company.  It was apparently not well constructed however, for, shortly after its completion, it collapsed.  Though rebuilt soon after, another mishap occurred when an annex burst, and, not long after that, the elevator burned down.  In the wake of these mishaps, two other elevators were built in 1917.  These were owned by the National Grain Company and the United Grain Growers.  The UGG had only recently been incorporated as a farmer-owned company, and it was a good time for it to build for, like most of the western prairies, the Rowley district was seeing high yields and much demand because the war in Europe was diverting the activities of farmers there to other matters.

The National and the UGG had a monopoly on the local grain export at Rowley until 1923, when the Searle Grain Company, formerly the Home Grain Company, decided erect another elevator on the site of their first one at Rowley.  At 40,000 bushels, this would be the biggest of the village’s three elevators.  It was an unusual time to build, for grain prices had recently collapsed in the wake of the post war overproduction of wheat.  Also, during 1919-20, both the Canadian Northern and the Grand Trunk Railways had been taken over by the federal government and consolidated into Canadian National.  This meant reduced services, and, in 1922, rail traffic between Vegreville and Drumheller were significantly reduced.

The three grain elevators in Rowley managed to survive however, and, in 1928, the UGG structure was acquired by the Alberta Wheat Pool.  Formed five years earlier, in the wake of plummeting grain prices, the Pool was a business concept advocated by UFA president Henry Wise Wood which saw farmers pool their wheat in a co-operative to ensure that no member would suffer unduly in times of stress.  Such stress occurred during the early 1930’s, when the price of #1 wheat fell to 32 cents a bushel and many farmers could not afford to ship out their wheat.  During the end of the decade however, with Great Britain gearing for war, the demand for wheat began to rise, and, with it, productivity on the Canadian prairies.  In 1940 therefore, the Wheat Pool decided to twin its elevator in Rowley with a new 40,000 bushel structure.

The three grain elevators at Rowley continued to serve the district long after the war.  In 1967, the Searle elevator was sold to the Federal Grain Company, and, in 1972, to the Wheat Pool, which then owned all three elevators.  In 1989 however, the CN line between Rowley and Morrin was closed down, and farmers soon began trucking their grain to Morrin or elsewhere.  The elevators therefore were closed also.  They remained standing however, and, in recent years, have been acquired by the Rowley Community Hall Association which is seeking to preserve them.

In June 2010, the grain elevators in Rowley were designated a Provincial Historic Resource.  Their historical significance lies in their representation of the major economy of Alberta for most of the 20th century, the growth and export of grain, and mainly wheat.  They are also important as landmarks in Rowley, providing structural evidence of the community dating back to 1917, when the district was prospering.  The first elevator represents the main source of that prosperity, and the three of them the economy of the district in the years that followed.

Click here for statistics on remaining grain elevators in Alberta.

Visit the Alberta Register of Historic Places to learn more about the heritage value of the Rowley Grain Elevator Row. In order for a site to be designated a Provincial Historic Resource, it must possess province-wide significance. To properly assess the historic importance of a resource, a historian crafts a context document that situates a resource within its time and place and compares it to similar resources in other parts of the province. This allows staff to determine the importance of a resource to a particular theme, time, and place. Above, is some of the historical information used in the evaluation of the Rowley Grain Elevator Row.