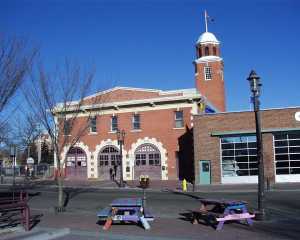 When the Calgary & Edmonton Railway arrived at the south bank of the North Saskatchewan River in 1891, the C & E immediately subdivided a town site which it named South Edmonton.  Being at the end of steel, the community steadily grew throughout the decade until, in 1899, it was incorporated as the Town of Strathcona with a population exceeding 1,000.  To serve this burgeoning community, which consisted primarily of wood frame buildings, it was obvious that some method of organized fire protection was needed.  A volunteer fire brigade was organized in 1901, and, that same year, Town Council provided for the construction of a wood frame fire hall on lot 2, block 79, just north of main street, and near the Town water well.  A horse drawn fire wagon with a wooden water tank was then acquired.

As with Edmonton to the north across the river, Strathcona grew rapidly in the wake of the Klondike gold rush.  In 1907, it was incorporated as a city with an estimated population of 3,500.  It was soon evident that the old fire hall was inadequate, and, so, provision was made for a newer and larger structure.  As the City waterworks was right next door to the old fire hall, it was felt appropriate to build the new structure at the same location.  The firm of Wilson and Herrald was thus contracted to design, and the firm of J.M. Eaton contracted to build a modern two-story red brick facility which could accommodate three fire wagons.  The estimate for construction was $13,715.  A stable in the rear was designed for nine horses, while a bell tower extended from the middle of the structure 77 feet in the air.  The second floor was made to accommodate a chief’s office, a general hall, bedrooms, a band room, and a bathroom with showers.  Two fire poles facilitated instant access to the ground floor.

The Strathcona Fire Hall with its horse-drawn wagons served the City of Strathcona until its amalgamation with Edmonton in 1912.  It was then designated as Edmonton Fire Hall #6 and became part of the Edmonton Fire Department.  A permanent salaried chief was assigned to the Hall, and the number of salaried firefighters grew over the passage of time.  The crews were always supplemented by volunteers in times of emergency.  By 1954, however, the facility was considered dilapidated and outdated, and, so, a new fire hall was constructed nearby.  The old structure was apparently slated for demolition but was considered adequate for storage, and, so, it was leased to Strathcona Furniture, which used it as a warehouse.

By the early 1970’s, there was a growing appreciation in Edmonton about the early buildings of Strathcona, and, so, when the Walterdale Theatre began to plan for a new home, thoughts turned to the old fire hall, which seemed to provide adequate space for a live theatre building.  The Walterdale group moved into its internally renovated facility in 1974, and, in 1976, the structure was designated a Registered Historic Resource.  In the years that followed, it became a central venue for Edmonton’s Fringe Festival.

In September 2007, the Strathcona Fire Hall was designated a Provincial Historic Resource.  Its historical significance lies in its provision of structural evidence of fire fighting facilities in a large urban area in the early 20th century in Alberta.  It is the oldest major fire hall in the province.  It is also important as one of the surviving early public buildings of the City of Strathcona, which tells of life in general in this community.

Visit the Alberta Register of Historic Places to learn more about the heritage value of the Strathcona Fire Hall. In order for a site to be designated a Provincial Historic Resource, it must possess province-wide significance. To properly assess the historic importance of a resource, a historian crafts a context document that situates a resource within its time and place and compares it to similar resources in other parts of the province. This allows staff to determine the importance of a resource to a particular theme, time, and place. Above, is some of the historical information used in the evaluation of the Strathcona Fire Hall.