In Part 1, we read about “Lee’s Creek,” as mentioned in Corb Lund’s song “The Truth Comes Out” and how Lee Creek in the Cardston area is named for early pioneer William Samuel Lee.  So, what’s up with the different spelling? Is it Lee Creek or Lee’s Creek? It may actually be both. Confused? Read on for more. 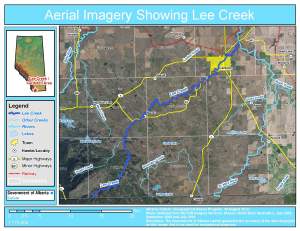 Even though Lee only lived on the creek named for him for about three years (1867-1870), the name stuck. A map produced by the Geological Survey of Canada in 1884 identifies the creek as “Lee’s Creek.” In 1894, the name “Lee Creek” (without the possessive apostrophe) was recorded by the Dominion Land Survey in the field notes of surveyor Fred W. Wilkins and in the diary of Arthur O. Wheeler (for more about Wheeler see the St. Nicholas Peak post of December 22, 2011). In 1901, the Geographic Board of Canada approved the non-possessive form of the name – Lee Creek – for use on official maps. The portion of the creek south of the 49th parallel remained officially unnamed until 1929, when the United States Board on Geographical Names (USBGN) sanctioned the name Lee Creek for their portion of the water feature.

So why the different spellings of Lee/Lee’s Creek? The use of the possessive form of words in place names is generally discouraged. Some of the rationales for not using the possessive form of names are that geographical features do not belong to a single person or group, but to all people; that place names are not words with a specific dictionary meaning, but are labels to which standard grammatical rules do not necessarily apply; and that the presence of apostrophes cause confusion, particularly when attempting to retrieve names in modern databases, internet search engines and directional software used by emergency services (police, ambulance, fire). There is also a belief (likely apocryphal) that apostrophes were not used on early maps because they were often confused with the standard cartographic notation indicating the presence of stones and rocks.

The USBGN and the Committee for Geographical Names in Australia both have policies prohibiting the use of the possessive apostrophe in the official names of geographical features. Many naming regulatory bodies in the United Kingdom have been eliminating apostrophes from their official names. Canada and Alberta also discourage the use of the possessive apostrophe, however Principle 5(A) of Alberta’s “Principles of Geographical Naming” does allow for the use of possessive forms if it can be demonstrated that form of the name is in long-standing local use.

However, despite all of the official naming standards and policies, local names and forms die hard. In the case of Lee Creek, even more than 110 years after that form of the name was officially adopted the locals still refer to it as “Lee’s Creek. When asked if the Lee Creek on the map was the same as the Lee’s Creek in his song, Corb Lund replied

Yup. Same one. It flows right through our ranch near Beazer. I grew up swimming and fly fishing it. My Grandpa, whose father homesteaded the place, called it “Lee’s Creek.” “Lee’s Crick to be really precise, but I’ve seen it called “Lee Creek.” In my experience, the locals I knew called it “Lee’s” and the book name was always “Lee,” but your mileage may vary…

At the end of the day, whatever the form the name takes, Lee (or Lee’s) Creek, the creek and its name continues to commemorate one of Alberta’s earliest pioneers.

Flows generally north-easterly from the border for approximately 65 km (35 km straight line) until it joins the St. Mary River just north of the Town of Cardston

More information about and images of Lee Creek and William Samuel Lee can be found in: