This is the second of two blogs about some of the unique evidence of early boating in Alberta. The first blog explores First Nations boats and the second discusses the earliest Euro-Canadian vessels from the adoption of the birch back canoe to steamboats.

Boating in the Fur Trade

The first European fur traders adopted an eastern Algonkian-style of birch bark canoe. Every year, hundreds of men and women in Alberta gathered supplies and moulded lightweight ‘Express’ canoes at major fur trade boat building centres like Fort Chipewyan, Fort Edmonton, and Rocky Mountain House. While canoes and other physical traces of boat building at these forts have long since decayed, other lines of evidence of early boating are preserved. Trading posts needed access to good birch and it is no coincidence that the locations of old forts are now surrounded by place names containing ‘birch’. Fort Chipewyan neighbours the Birch Mountains (first called the Bark Mountains by early traders) and there are many Birch Flats, Birch Lakes, and Birch Creeks named for their source of boat supplies. Henday camped by the ‘Birch Hills’ near Edmonton in 1755 when he and his party built 35 canoes to send furs to Hudson Bay.

Voyageur skeletons from Fort Edmonton and Rocky Mountain House also tell the story of early boating. Being on the water all day was wearying but it was the burden of packing gear over portages that broke men and deformed their bones. Archaeologists at the University of Alberta have shown that men bore severe spinal abnormalities due to heavy loads while arm and foot joints had osteoarthritis and huge muscle attachments from endless hours of paddling, kneeling, and packing. Even skulls were altered by the use of tumplines around the forehead.

The York boat was designed by the Hudson’s Bay Company to increase cargo weight and decrease the number of required men. The first one in Alberta was built at Edmonton House by 1795. For a short while, carpenters at Edmonton House were planing planks for York boats while rival Northwest Company canoe builders a stone’s throw away at Ft. Augustus were steaming birch. With amalgamation of the companies in 1821, the canoe slowly decreased in importance.

By 1875, the first steamboat (a sternwheeler called the ‘S.S. Northcote’) arrived at Ft. Edmonton. A trip to Winnipeg that formerly took weeks could now be done in a mere ten days. When the ‘Athabasca’ launched in 1888 on the river of that name, passengers gained access to 3000 km of navigable waters to the Arctic. Steamboats played a significant role in opening up the North.

Steamboats plied calm waters but ‘scows’ were still needed to ferry goods across turbulent stretches. Steamboats and scows operated in tandem across Alberta until the completion of railroads to Edmonton (1891) and later Ft. McMurray (1921), which largely squelched the steamboat industry. 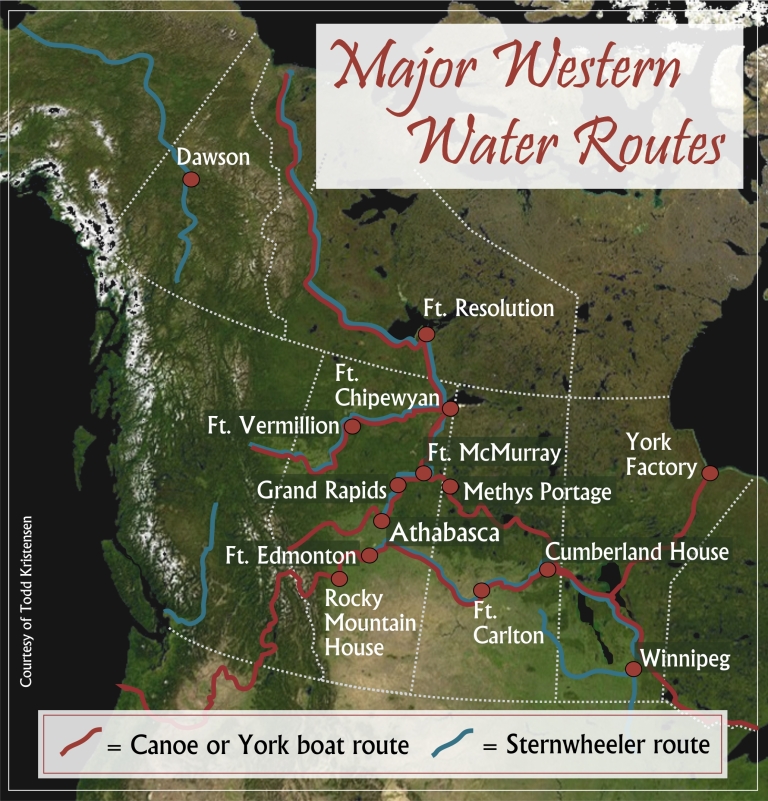 Alberta is divided by water but people transformed these barriers into corridors. While modern society relies largely on ground and air transport, it was paddlers who charted the early course of the province’s history.

The Heritage Art Series is a collaboration of the Historic Resources Management Branch, the University of Alberta, and the Royal Alberta Museum. Each artwork shares an important story about the people of our province: we hope it fosters a greater awareness of our past and instils a deeper respect for it. The scene below is by Jason Carter who grew up in northern Alberta in the Little Red River Cree Nation. The painting highlights the legacy of boating in Alberta and captures the adventure and beauty of paddling in northern waters. The canoe is an iconic symbol of our identity and continues to be enjoyed by paddlers across the province.

Click the following text to view past paintings in the Heritage Art Series and their interpretive stories:

Volcanoes and their impact in Alberta

Early Cabins in the West

An article about early boating in the West by the current authors appeared in the April/May, 2015 issue of Canada’s History Magazine.