Knowing the date of an archaeological site is one of the things that makes it most interesting – when were people here?

Two main types of dating are applied to archaeological sites when possible– relative and absolute dating. Relative dating puts sites or artifacts “in order” by simply determining if one event happened before or after another. A common example of relative dating in Alberta is by using Mazama Ash. About 7600 years ago, Alberta was blanketed in ash after the Mazama volcanic eruption. This ash is still sometimes found today in stratigraphic profiles, buried under other deposits of sediment. When this ash is encountered it can be used as a time marker. Anything below it is older than 7600 years and anything found above it is younger than 7600 years.

Absolute dating is more specific than relative dating and provides a more exact date (with standard deviation) of when the site or artifact was used. There are several methods of absolute dating but one of the most common methods used by archaeologists is radiocarbon dating. Radiocarbon dating can be used on organic material such as bone or charcoal. A radiocarbon date can be obtained by measuring the amount of 14C (radiocarbon) left in an organic material. The way it generally works is that all living things acquire the C14 (radiocarbon), 12C and 13C isotopes through interaction with the atmosphere. This acquisition ceases when the plant or animal dies. While the amounts of 12C and 13C isotopes remain stable following death, radioactive 14C begins to decay at a fixed rate. The ratio of stable carbon to radiocarbon can be then used to estimate how much time has elapsed since the death of the plant or animal. In this case, it is known that half of the 14C in dead organic material will be lost in 5,730 years – this is known as the half-life. From there, another half will be lost in another 5,730 years, and on and on until all of the 14C is gone. After about 50,000 years all the carbon will be lost, meaning that anything older than 50,000 years cannot be radiocarbon dated effectively.

Of the almost 40,000 archaeological sites in the province, approximately 1,400 have associated radiocarbon dates. The maps below show the location of these sites and the general time period they fit into: 12,000-10,000 14C years B.P., 10,000-8,000 14C years B.P., 8,000-6,000 14C years B.P., 6,000-3,000 14C years B.P. and 3,000-500 years B.P. There tends to be more dates as you progress through time, and this is likely a function of better preservation of organic material at younger sites. However, even in the relatively coarse classification of the chart below, we can see some patterns that spur archaeological research, like: why is there a dip in the number of dated sites around 7,000 to 5,000 14C years before present? If we “zoom” in on these data, finer spatial and temporal patterns emerge that can help trace the movements of people, cultural traditions, and artifact types through time. 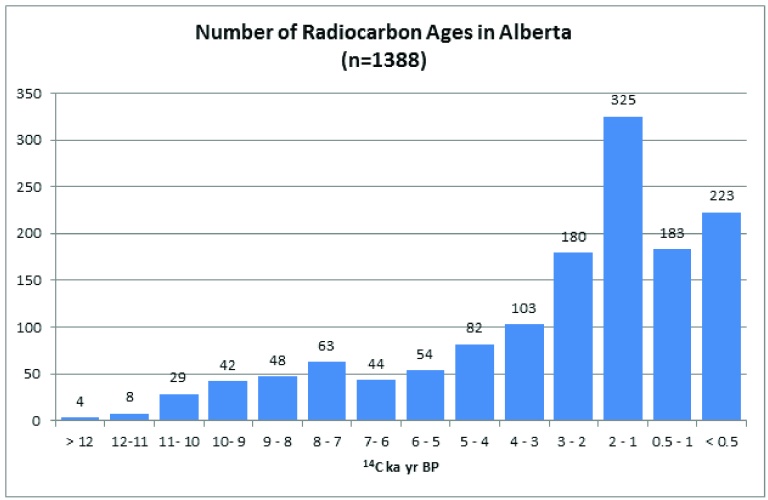