Stone tools and debitage, also known as lithics, are one of the most common types of artifacts found in Alberta. In the past, stone tools were an essential part of Indigenous ways of life. These stone tools and associated debitage (pieces flaked off while the stone tool was being manufactured) are made from a variety of stone types, but generally they need to be produced from quality raw materials. The characteristics of a quality raw material for making stone tools include stones that are finer-grained, somewhat brittle and uniform in texture and structure, and have few or no inclusions because these might make the rock break in unpredictable ways. Some of the highest quality material that was used in Alberta in the past comes from other places around North America, such as Knife River Flint from North Dakota, obsidian from British Columbia and the northwestern United States, and other types of cherts, argillites and other materials from neighboring provinces and states. However, several material types are available locally. Some of the most common types available in Alberta include quartzites, siltstones, cherts and petrified wood. In East Central Alberta, a common type of rock utilized by Indigenous groups in the past was pebble chert. There are areas where this stone is readily available and it can be high enough quality to be knapped into tools. While these pebble cherts can sometimes be found today in road cuts or blowouts all across East Central Alberta, there are two pre-contact quarries and associated archaeological sites near Consort, AB where large concentrations of these materials were found, collected and utilized. At these sites, there is evidence that Indigenous groups used rounded and fist-sized pebbles of chert to make stone tools.

The Misty Hills quarry site and complex (Borden block EkOp) is unique because it has large densities of both high quality chert and quartzite pebbles found in more than 130 blowouts across the site. In addition to the raw pebbles, there are many associated quarry features at the site including battered and split pebble cores and lithic debitage, hammerstones and anvil stones (Hanna 2011). Hammerstones are stone cobbles that were used to hit other objects or stones to break pieces off. They are characterized by battering or crushing scars on the ends. Anvils are large stones that were used as a base to support an object being hit. These artifacts all indicate the sites use as a secondary lithic quarry and workshop area. Since high quality toolstone can be relatively rare in this part of the northern plains, this site is very important for interpretation and research (Hanna 2011). It would likely have been a very important resource for groups in the past, because they would have needed to produce large amounts of stone tools such as projectile points for hunting bison and other animals, and for processing the hides and meat with stone scrapers and knives. Having access to local high quality lithic material would have been a big advantage when preparing for these tasks.

Black pebbles and debitage scattered across a blowout at the Misty Hills site (EkOp-41. Photo credit: Lifeways of Canada Ltd. 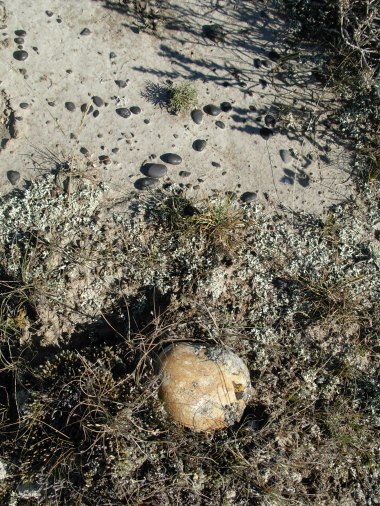 Less than 20 km from the Misty Hills quarry is the Consort Pebble Chert Quarry (EkOr-8). While this site was known locally for a long time, it was officially recorded as an archaeological site in 1999. This large site is defined by the presence of depressions that vary in size from one to three meters in both depth and diameter. These depressions are natural and, while it is not known exactly how they were formed, they are likely the result of glacial phenomena. From an archaeological perspective, the ground surface around these depressions contains an abundance of chert pebbles, as well as debitage, split pebbles, scrapers and anvil stones indicating that this area was once used as a quarry where people used these naturally exposed chert pebbles to make stone tools. In addition to the lithic artifacts, several cairns and a stone arc are also present at the site (Steuber 2009). Like the Misty Hills site, this area would have been an important resource for groups in the past where they could have acquired high quality raw materials for making stone tools.

The Misty Hills Quarry and Consort Pebble Chert Quarry sites represent two unique sites in East Central Alberta where Indigenous groups could have obtained local raw material for producing stone tools necessary for carrying out tasks like hunting and hide processing. These sites would have been an important resource for people in the past, and today are important for the interpretation and understanding of Alberta’s archaeological record.