So where did it all begin? The first archaeological research permit in the province was issued to Karlis Karklins in 1973 by Alberta Culture, Youth, and Recreation. The permit was for his research at Nottingham House, a Hudson’s Bay Company trading post near Fort Chipewyan, as a part of the Western Fur Trade Research Programme. The programme was initiated by Parks Canada in 1968 to explore the history and archaeology of the fur trade in the Athabasca region. As part of that project, Karklins began researching Nottingham House in the early 1970s.

Nottingham House was a fur trade post established by the Hudson’s Bay Company (HBC) in 1802. The HBC hoped to compete with the North West Company (NWC), who held a 20 year monopoly on the famed fur-rich areas of the Athabasca region. Peter Fidler, an experienced HBC surveyor, along with his Swampy Cree wife, Mary, their children and 17 other explorers arrived at Fort Chipewyan in late 1802 to set up the new trading post, Nottingham House. In the style of competitive exploration that characterized the fur trade in western Canada, Nottingham House was erected less than a mile from Fort Chipewyan, a successful NWC trading post established in 1788.

Despite the best intentions of the HBC and Fidler’s crew, Nottingham House was not a successful trading post. The NWC at Fort Chipewyan took every chance to sabotage trade at Nottingham House, even going so far as to burn HBC canoes and to have individuals that were known to trade with the HBC beaten. In their first year, the HBC at Nottingham House generated a return of only six bundles of fur, which did not come close to covering the costs of their expedition. Fidler and his company remained at Nottingham House for four years, during which they struggled with dwindling trade, starvation and increasingly aggressive attacks from the NWC. On June 9, 1806, Nottingham House was abandoned and the HBC traders moved on to other posts. 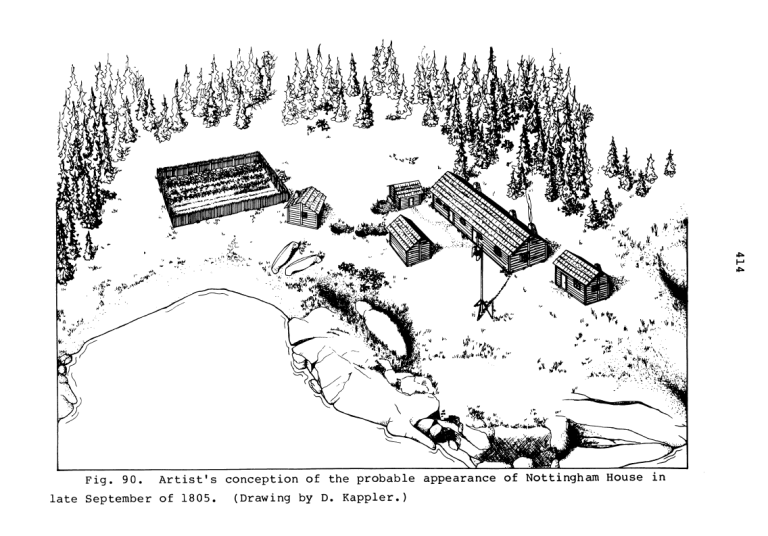 The Nottingham House archaeological site was excavated by Karklins, an employee of the National Historic Parks and Sites Branch of Parks Canada during the 1970s. Karklins and seven others began their first 14-week excavation season in June 1972, returning for a lengthy field season each summer until 1977.

The archaeological crew unearthed just over 1,072 square meters of the site, revealing the remains of several buildings and work areas. The main house, measuring about 15 meters by 5 meters, was made up of four rooms with fireplaces, storage pits and a cellar. The site surrounding the main house included a storehouse, a provisions shed, a garden and several outdoor working areas, storage pits and trash pits. The structures were made from the locally-available wood, stones and clay. Most of the structures showed evidence of burning, which suggests that the NWC may have burned the camp after the HBC abandoned it in 1806.

The archaeology crew also uncovered 5,707 complete artifacts and a further 1,006 broken fragments of artifacts during their field seasons. The artifacts are typical of a fur trade post from that era. Most artifacts were personal items that would have been used by those living at the post or were kept as items for trading. These included beads, combs, mirrors, books and glass and ceramic containers.

The other artifacts reflect what would be needed to construct and maintain a fur trade post in undeveloped territory in 19th century Boreal Forest Alberta, such as tools and hardware (axes, nails and saws), hunting and fishing gear (gun parts and ammunition) and household items (cookware, furniture and sewing supplies). The historical record suggests that the HBC crew relied on a protein-rich diet, consisting mostly of animals and birds such as moose, bison, caribou, dog/wolf, snowshoe hare, swans, ducks and cranes that were traded from the local Aboriginal population. Other animals identified from the faunal remains included Arctic fox, muskrat, marten, wolverine and lynx, all of which were hunted for their furs and may have been eaten as well. The crew was also able to fish in Lake Athabasca and grow potatoes and turnips in their gardens.

Karklins’ research in the 1970s served to build a better understanding of the economy and material culture of the Nottingham House fur trade post. The site has not been excavated by archaeologists since the 1970s, but Karklins’ research has proved valuable for other archaeologists and historians studying the fur trade in western Canada, and especially in the Athabasca region of Alberta. The archaeological site of Nottingham House remains protected by the Historical Resources Act as an Alberta Significant Archaeological Site.