“The antelope possesses an unconquerable inquisitiveness, of which hunters often take advantage…The hunter, getting as near the animal as is practicable, conceals himself by lying down, then fixing a handkerchief or cap upon the end of his ramrod, continues to wave it, remaining concealed. The animal, after a long contest between curiosity and fear, at length approaches near enough to become a sacrifice to the former.” (James 1905, vol. 2, pp. 227)

On two different flights over southeastern Alberta, separated by about thirty years, unusual stone features were observed on the landscape. Upon further inspection by archaeologists, it was determined that these two sites are the remnants of drive lanes and traps that were used for the communal hunting of pronghorn (Antilocapra americana, also commonly referred to as antelope).

While it is commonly known that bison were one of the greatest resources for precontact North American Indigenous groups, it is important to note that before European arrival, it is thought that there were just as many pronghorn as bison in North America. They were an important resource as well, particularly for people living in the Great Basin region of the United States, as pronghorn were one of the largest game animals available in that region. For Plains groups, bison were preferred for meat (and there is abundant archaeological evidence of this in the many bison kill sites across the Plains), however, pronghorn were valued for their hides to make clothing and other items. 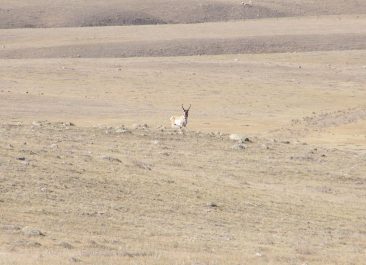 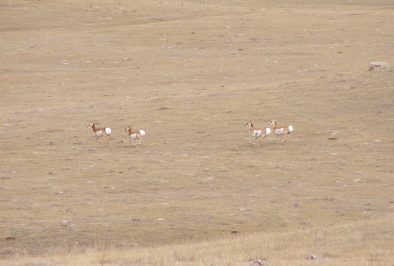 Communal antelope hunting is documented in many historical accounts both in the Great Basin and on the Plains. These accounts describe wood and brush drive lines that led to fenced enclosures and to pit traps excavated in the ground. Hunters disguised themselves as antelope, wolf or other animals to get close to the herds and then drove the animals into the enclosures or pit traps where they were hit with clubs or shot by archers. Not only are pronghorn extremely curious, as noted in the opening quote, they have very keen eyesight and can spot movement from several kilometers away. Hunters, skilled charmers, and shaman used this to their advantage as they employed techniques such as waving objects to get the antelope’s attention, knowing that due to their curiosity, they would move toward the object and be lured into traps.

Another important aspect of antelope behaviour, from a hunter’s perspective, is that they are reluctant to jump over objects, even relatively low ones. Their preference is to either crawl under barriers, if possible, or follow it until they find an opening; therefore it is possible to easily influence their movement with carefully placed obstructions or barriers. The Blackfoot constructed small piles of stones with “willows bowed over each rock pile, thus forming a kind of fence.” (Wissler 1910: 38). Other accounts note that, at times, people themselves – men, women and children – formed human barriers. Pound structures were one of the common techniques noted in the historical accounts for hunting antelope. Pounds were also commonly used to hunt bison.

“Antelope were taken in a pound somewhat after the method for taking buffalo. There is an old site on Birch Creek in the Blackfoot Reservation, Montana. A pit was dug about two meters wide by six meters long to a depth of from three to four meters. The earth from the excavation was ridged up at the sides of the hole and decked with fresh branches. Two converging lines led up to this pit as in the buffalo pound. There was one important difference, however. As the lines came near together, a turn like an elbow was made to conceal the obstruction at the pit, thus lessening the tendency of the running antelope to jump the line. The lines were marked by small heaps of stones, about a meter apart. Two or more slender willows were bowed over each rock pile, thus forming a kind of fence. When antelope were seen grazing within the lines, the young men stole up to the rear and flanks, while old men, women and even children manned the lengths of the lines. They lay down behind the rock piles. When the antelope were started and approached a line, the concealed watchers waved something in the air to turn them. Thus, the poor animals ran down between the ever narrowing fences to the brush-covered ridge in front of the pit. Leaping this, they fell into the hole and were caught.” (Wissler 1910: 38)

Located on a terrace above the South Saskatchewan River valley, this site has two drive lines that form a v-shape as they narrow toward the north end where they meet adjacent corners of a rectangular stone enclosure. When the site was excavated by archaeologists, it was determined that the rectangular stone structure represented the remains of a stone wall that surrounded a pit that at the time of the hunt would have been upwards of 80 centimeters deep. Over time, the stones that made up the wall had largely collapsed into the center of the pit, and along with dirt, filled it in. The wall itself may have been an additional 80-100 centimeters high, making the pit a total of about 1.5-2 meters high. Given the pronghorn’s reluctance to jump over objects, this would have been a substantial barrier to the animals. Similar to the historical accounts, the animals were likely driven into this pit and then killed by hunters.

Pronghorn bone was recovered from the Laidlaw site, confirming its use as an antelope kill site, but far fewer bones were recovered at this site than would be typical for bison kill sites in Alberta. This is likely because antelope, with males weighing an average of 113 pounds and females an average of 92 pounds, are small enough to be carried whole back to camp, so rather than butchering or partly processing the animal at the kill location, it would have been removed completely. Bone from the Laidlaw site was radiocarbon dated to 3280 +/- 110 years before present.

Aerial image of the Laidlaw Site.

Plan map of the Laidlaw Site, from Brumley 1984. Excavation was carried out in the rectangular stone enclosure and pronghorn bone was recovered.

The Laidlaw Site, DlOu-9. Note the v-shaped drive lines that meet the corners of a rectangular stone enclosure.

The Barnett Antelope Drive is also located in southeastern Alberta, north of the Red Deer River, about 130 km northeast of the Laidlaw site. This site consists of two converging stone drive lines with short hooks at the end. The wide end of the lines is to the north and the lanes converge as they head south, forming a v-shape. The lines lead to a downhill drop in the landscape of about 25 degrees, which would have been sufficient to cause the running pronghorn to stumble and fall, giving hunters time to club and shoot them. The downhill portion of the drive has a depression that may have, in the past, had a catchment structure around it such as a wooden pound or corral, or netting – the remains of which would not be preserved in the archaeological record. It is also possible that the depression may be a pit that has filled in over time with rocks and dirt, similar to the Laidlaw site. The hooks at the end of the lines may have functioned as blinds to conceal hunters who would strike when the herd passed through the v-shaped funnel. No excavations have been completed at the Barnett site, so these ideas are not confirmed yet, and the age of the site is unknown.

Barnett Antelope Drive, EfOp-403. Note the drive lines and the hooks on the end. 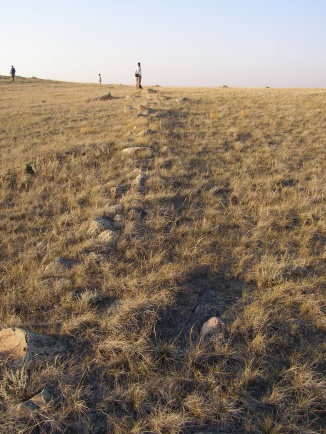 One of the drive lines at the Barnett Antelope Drive. Photo courtesy of the Royal Alberta Museum. 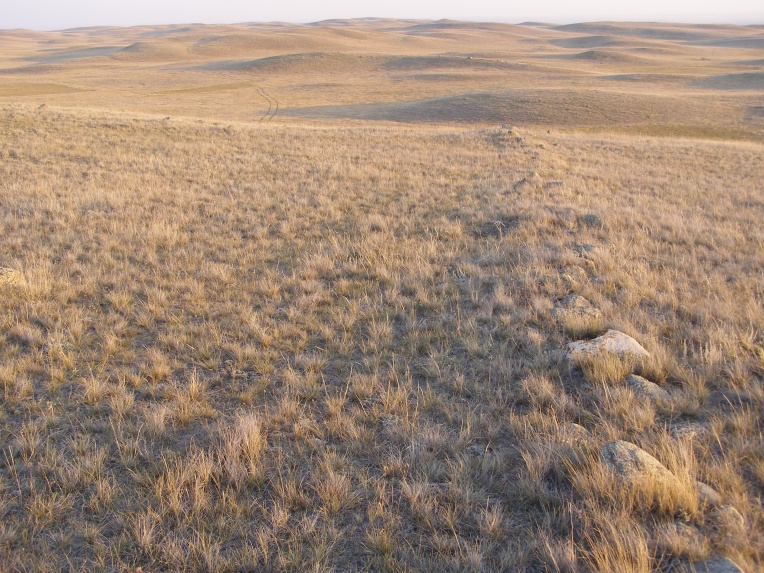 One of the drive lines at the Barnett Antelope Drive. Photo courtesy of the Royal Alberta Museum.

Also present at both the Laidlaw and Barnett sites are stone structures located just outside the drive lines, near the end of the drive. At the Barnett site, the structure is oval in shape and measures approximately 3 meters by 2 meters. At the Laidlaw site, the structure is roughly circular and 2.5 meters across. These structures could represent hunting blinds or “shooting booths,” but many ethnographic accounts note the importance of the shaman’s role in the hunt, with their designated position being at the end of the drive. These circular structures could also represent a lodge or shelter for the shaman who used “controlled use of sound, visual signals, movement and powers acquired through visions…to control the actions of the herds” (Brink 2013:33).

Pronghorn traps in the archaeological record of the Great Plains are very rare. These two sites, Laidlaw and Barnett, shed light on a lesser known aspect of Alberta’s history – the precontact practice of communal pronghorn hunting. Credit goes to both the professional and avocational archaeologists who recognized the uniqueness and importance of these sites and did great work recording them. As we continue to learn about Alberta’s archaeology, hopefully more of these unique sites can be identified.

Written By: Courtney Lakevold, Archaeological Information Coordinator (with special thanks to Jack Brink for his input)

One thought on “Pronghorn Traps on the Northern Plains of Alberta”