Editor’s note: The International Council of Archives has designated June 8-14, 2020 as International Archives Week. Its theme, Empowering Knowledge Societies, highlights the ways in which archival institutions contribute to sustainable knowledge, trust and evidence, and the challenge of emerging technologies.

When historians decades from now look back at society during the COVID-19 pandemic, what will they see? Artifacts, documents and various media will certainly tell the story of how we dealt with an historic event. With the pandemic at the forefront of everyone’s thoughts, it seems timely to examine the holdings at the Provincial Archives of Alberta (PAA) that document other public health crises. Alberta has experienced pandemics such as the worldwide 1918-1919 flu pandemic (often referred to as the Spanish grippe or Spanish flu epidemic) as well as a series of more localized poliomyelitis epidemics in Alberta that occurred in 1927 and 1953. While history books in the reference library tell one author’s version of events, what do the original archival records preserved at the PAA tell researchers about other widespread outbreaks of disease in the twentieth century, and can they inform our current circumstances?

Starting in 1905, a branch of the Department of Agriculture managed the Government of Alberta’s public health programs until the province established a separate Department of Public Health in 1919. For reasons that are unclear, few records of the Department of Public Health appear to have survived prior to the 1940s. However, one incredible survivor of that era is a scrapbook created by Public Health that contains newspaper articles tracking the progress of the 1918 influenza pandemic across Canada, with a special focus on developments in Alberta. The articles detail the number of cases, the preventative measures (including the closures of schools and restrictions on public gatherings), announcements from medical officers of health and the death toll.

While an overarching and comprehensive information resource, the scrapbook does not provide the entire story of the Government of Alberta’s response to the pandemic or the impact on the citizens of Alberta. So, without other records of the Department of Public Health, where can that story be found in the PAA?

Research trickery comes into play when you think about the other people and organizations involved in the events of the pandemic:

Records of the Executive Council

At its highest levels, the provincial government was involved in addressing the challenges posed by the pandemic. Executive Council quickly created orders-in-council and regulations regarding increased overtime for medical staff, the closure of schools and theatres and the wearing of masks. Executive Council also had to pass an order-in-council easing aspects of the province’s liquor laws, as prohibition had decreased the supply of alcohol available to druggists prescribed as a treatment for the flu.

Records of the Attorney General

That department was responsible for the Public Health Act, and its file for that period contains numerous letters with government departments and citizens regarding local boards of health, compensation for financial losses incurred by businesses and the use of masks in communities.

Records of the courts

Criminal case files document the arrest of many individuals for contravening public health regulations during the pandemic, such as breaking quarantine or refusing to wear masks in public. The court could impose a fine or sentence someone to one month’s imprisonment. The court’s probate files for the estates of deceased individuals would also register a significant increase in volume.

Most, if not all government departments, commented on the effects of the pandemic on their operations. For example, the annual report for the Alberta Provincial Police outlined how officers, “served as doctors, nurses, undertakers, and gravediggers, and this work was done unselfishly and with an utter disregard of the danger.” Regional reports from police divisions provided further details about local efforts to address the pandemic. Even the Public Works Department discussed the impact of the pandemic, as it was responsible for institutions such as the provincial asylums and jails. These sources may indicate that records about the pandemic may survive in transfers received at the PAA from these departments.

Records of the Vital Statistics Branch

While the branch annual report provides the big picture regarding the impact of the pandemic, the individual death registrations provide specific information about the people, their professions, their ages and the duration of the illness.

It can sometimes be difficult to determine the extent of the records that people have donated to the PAA about their experience with the pandemic. There are some photographs showing people wearing masks and oral histories touching upon people’s experiences, but it seems likely that any diaries, correspondence or photograph albums dating from October 1918-1919 will have at least fleeting references to such a dramatic, all-consuming event in the province’s history. 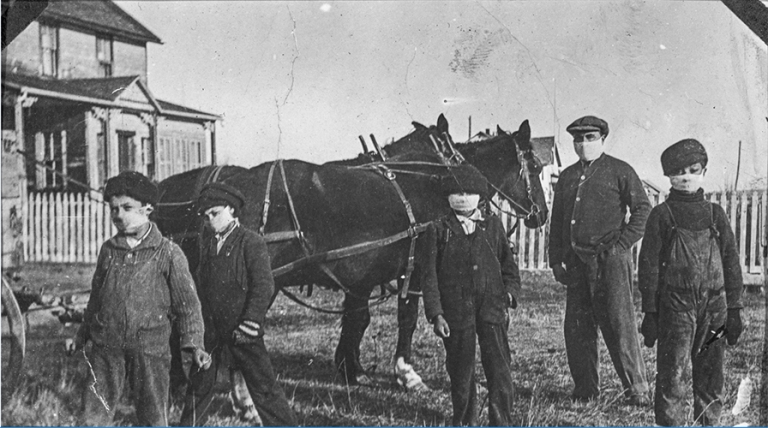 While the 1918-1919 pandemic is the most direct parallel to COVID-19, Alberta also faced more localized, smaller scale epidemics that were no less devastating. For example, poliomyelitis epidemics struck Alberta in 1927 and 1952-1953 as part of larger regional outbreaks. Can the strategy of widening the search to include other people and organizations work for researching Alberta’s polio epidemics?

As it turns out, this approach does work and provides some unexpected resources.  In addition to the Department of Public Health’s annual report, photographs of polio wards and an Alberta Public Health Bulletin highlight elements of the 1927 epidemic.  The passage of the Poliomyelitis Sufferers’ Act in 1938 highlights approaches to treating the disease and providing academic and vocational training for those who had contracted the disease.

As it was the largest outbreak, the 1952-1953 epidemic has perhaps the largest volume of records. While the annual report again provides an overview of the epidemic, the Executive Council records include orders-in-council directing the closure of theatres and public pools. The Premier’s Office files about communicable diseases contain letters and petitions about the issue. MLA and Cabinet Minister Gordon Taylor maintained a file about polio-related concerns. Although the files are inconsistent, the records of the Department of Public Health discuss issues surrounding polio throughout the period of the 1950s epidemic up until the 1960s.

There are numerous photographs from a variety of sources, including the Government’s Publicity Bureau as well as private photographers. The holdings even include an oral history with a doctor active during this epidemic as well as records related to historian Tony Cashman’s research into the history of the University of Alberta Hospital, which housed an after-treatment polio hospital starting in 1927.

The events of past pandemics and epidemics obviously have some parallels to the situation that Alberta finds itself in now. So, what might this also say about the documentation at the PAA that may be accessible to researchers a hundred years from now?

Researchers can expect to find a large volume of government records from a variety of sources. Executive Council and Health will have numerous files about the Government of Alberta’s response to the pandemic, including public notices from medical officials, announcements about support programs that assisted individuals and families, and the guidelines under which the Relaunch Strategy reopened the Alberta economy. Compared to the sources available for the 1918-1919 pandemic and other epidemics, future researchers will have the benefit of new media, such as television and web content, to provide further layers of understanding to the story from the perspective of the Government of Alberta and those living in the province.

The portion that may be missing from the PAA’s holdings are the donations of records of individuals, businesses, organizations and families that tell the more personal side of the pandemic story: letters, emails, journals, photographs, minutes of meetings, artworks and other records created during this unique international event will tell Alberta’s part of the COVID-19 story.

Archives play an important role in collecting and caring for records that document the day-to-day events in our societies, and ensure future generations can look back on and learn from records created from a variety of perspectives. Every Albertan has a story and can help to add important context and details to the memory of our shared history.

When you look at the records you have created during this unusual time, please think of an archival program that might be interested in preserving them for future researchers. In fact, you might be tempted to sort through a box of photographs or documents as a quarantine project. Before you throw them away thinking that the records have no value, you might consider what stories they tell and whether an archival institution such as the PAA or your local archival program might make a good home for them.

The Provincial Archives of Alberta remains closed for now, but it is reviewing its operations. Check out the PAA’s Covid-19 information for the latest updates.