Editor’s note: Oki! June is National Indigenous History Month, an invitation to honour the history, diversity, strength and contemporary achievements of Indigenous peoples. Aboriginal Consultation Advisers Blair First Rider and Laura Golebiowski, both based in Treaty 7 territory, met at the Okotoks Erratic this spring to discuss the significance of the site to the Blackfoot Confederacy.

If you’ve ever travelled southwest of Calgary and witnessed a towering mass of quartzite stand out among the prairie landscape, you are continuing a tradition that Indigenous peoples have done since time immemorial. The 16,500-tonne boulder is colloquially known as the “Big Rock,” but in Blackfoot it is Okotoks—the direct translation of the word “rocks.”

The erratic is a wildly impressive and imposing sight. However, there is more here than immediately meets the eye. For the Blackfoot, this is a location where the world began; where supernatural mischief-maker Napi was pursued by the rock as he traveled from south to north, creating the mountains and rivers.

Blair First Rider can still remember the first time he heard the Okotoks creation story.  Raised as a kiipita pooka—a grandparent’s child—he grew up with the stories shared by his grandfather, Maatoom Kitopi (George First Rider). Despite generations of government policy that forcibly separated Indigenous peoples from their language, community and places of significance, the stories and oral traditional prevailed. “I used to listen to the old men who would come around to the house, and they would tell stories way into the night. One of the stories was about Okotoks. That’s how they impart knowledge and life lessons and morals to the children, through Napi stories.”

Napi stories are moral teachers that contain lessons (usually that result from some trouble that Napi found himself in). You may hear slight variations in the Okotoks origin creation story, depending on the storyteller. “You have to allow for slight variations from a Siksika interpreter or a Piikani interpreter or a Blood/Kainai interpreter, but the essence of the story is the same. There are morals and lessons connected to these sites.”[1] In the video below, Blair shares the origin creation story as it was told to him by Maatoom Kitopi (the transcribed text is at the bottom of this post).

In the old days, Blair says, the Blackfoot used the site as a place of visitation, ceremony and documentation. Vision quests took place, and red ochre was used to record important events and imagery—a battle scene, a hunting party—on the rock’s surface. “These pictographs are also stories, and that is how we recorded significant events that are connected to this landscape…These are our landmarks and place names; it’s our record in stone. [There are] records throughout the whole of Blackfoot territory[2], telling of our encounters or adventures, or how Napi was involved in making the landscape.” 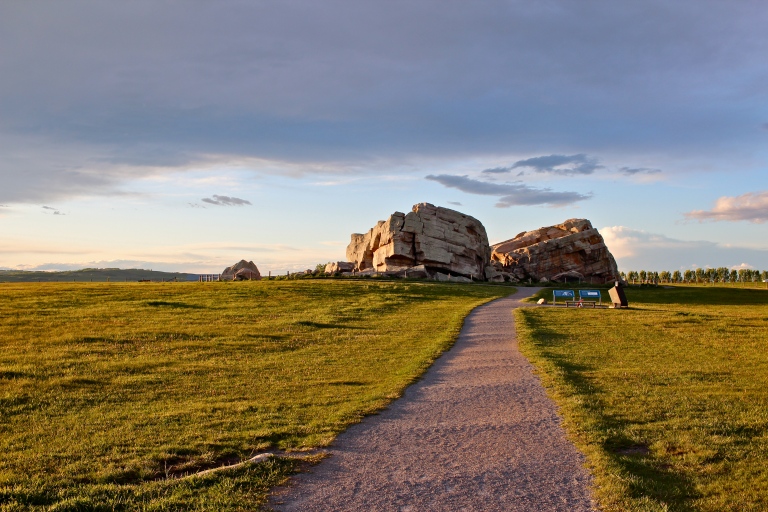 Today, Blair visits Okotoks frequently as part of his extensive outreach work. He often brings school groups and Indigenous youth, communicating the site’s significance as a way to instill pride and encourage stewardship. Blair believes it especially important for students and children to visit these sites: to hear the stories and to make that connection to their past. “I think it’s significant for the children, when they are at the site and they see the gophers running around, and they see birds and bats flying around. In addition to hearing about it or reading about [Okotoks], to actually visit the site is far more meaningful. It just sparks their interest and that’s important in this time of reconciliation.”

“Because of colonialism, our language was banned, our religious practices were banned and it extended to visiting these sites because of the permit system [that banned First Nations peoples from leaving the reserve without government permission].” The ability to visit the rock today, and to tell the story in the Blackfoot language (Blair notes that there is more meaning and depth to the stories when told in Blackfoot instead of English), makes Okotoks not only a historic place of the past, but also a contemporary site of cultural revitalization and resurgence.

If you are fortunate enough to experience Okotoks in person[3], please be respectful of its significance. Look up for the sky people—the birds and the bats—and the ground people—the gophers. You now know why they look the way they do! Remember the lesson that Napi learned here: do not take back what you have given away. Blair encourages visitors to tactilely engage with the erratic, but please keep your feet on the ground and do not cross the fence. For your safety, the safety of others and for the preservation of the erratic’s sensitive features, do not climb, boulder or use equipment on Okotoks.

Blair First Rider is a Kainai (Blood Tribe) Elder and Horn Society grandparent, and an Aboriginal Consultation Adviser with the Historic Resources Management Branch. Thank you Blair for sharing your knowledge and experiences. Suukapi!

Here is the transcribed text of the Napi origin creation story, as told by Blair First Rider:

Back in Napi’s time, everything was alive, everything was animate. The rocks could talk, the animals could talk. It was alive. As Napi was creating the landscape, he was coming from the south going north. It was a nice day, hot and sunny. [Napi] always had his constant companion, the coyote, with him. They came across this rock, at about noon, so they sat in the shade of the rock and had a lunch of pemmican and dried meat and berries.

Napi always had his buffalo robe with him, but it was so hot that day that he offered it to the rock. He said, “Here, rock, you can have this robe to keep you warm.” The rock said, “Oh thank you Napi, it will keep me warm when it’s cold.”

Napi kept coming, making the landscape, the trees and the rivers and hills and mountains. The weather changed: it started to get cold, windy and rainy. Napi told the Coyote: “Run back to that rock and get my robe.” Coyote ran back to the big rock and told it: “Napi wants his robe back.” The rock said, “No, he can’t have it back, he gave it to me.” Coyote ran back to Napi and told him, “The rock said you gave it to him and you can’t take it back.”

[Napi] kept coming north. Pretty soon they could hear a loud, rumbling noise and they looked back and that big rock had started to chase Napi. Up and down and every which way they would go, that rock was after Napi, to run over him.

The first thing Napi spied was some gophers, omkaakati. Back in Napi’s time, the gophers were five feet tall. So he waved at them and said, “Hey you gophers, help me, that rock is going to run over me.” The gophers had a quick meeting and said, “Oh that Napi is in trouble again, we better help him.” So all the gophers made a big line (and you see them standing on their gopher mounds today, looking around). They stood in a line and they thought they could stop it, but that big rock just rolled right over those gophers and flattened them all. So that’s why today they’re the size that they are. But [the gophers] couldn’t stop the big rock. Napi had to keep running.

The next thing he saw were some bats flying around, makaapii-pita. The same thing, he waved at the bats and he told them: “Can you help me? That big rock is after me, it’s going to run over me.” The same thing, the bats had a quick meeting and said: “We have to help Napi, he’s in trouble.” So the bats took turns: they would fly into the big rock and smash it, face-first. They managed to knock off a few pieces here and there, but not enough to stop it. That’s why today bats have a pushed-up nose like they do. But they couldn’t stop the rock, so Napi had to keep running.

So we’re about where we are today, at Okotoks. [Napi] saw some nighthawks flying around, pistoo. And he waved at those nighthawks: “Hey you birds, help me, that big rock is after me!” The same thing, the nighthawks had a meeting and they said, “Oh we better help Napi.”  The birds took turns and flew by the big rock, and as they swooped by it they would blow gas at it. Eventually they blew enough gas at the big rock to split it in two and stop it where it stands today.

[1] The Blackfoot Confederacy is comprised of Siksika Nation east of Calgary at Cluny/Glechien, Kainai Nation/Blood Tribe, located near Cardston, and the northern and southern (Blackfeet) Piikani Nation, located near Pincher Creek and Browning, Montana, respectively.

[2] Blackfoot traditional territory is considered to have expanded north to the North Saskatchewan River, east to the Great Sand Hills in Saskatchewan, west to the Rocky Mountains and as far south as Montana.

[3] (If you are unable to experience Okotoks in person, a 3D scan of the erratic can be accessed via CyArk and the University of Calgary here.)

2 thoughts on ““Our record in stone”: Blackfoot perspectives of Okotoks”