Editor’s note: Since 2017, Dane Ryksen has been documenting Edmonton’s built heritage on Instragram. Follow @_citizen_dane_ for even more of his research and photography. All photos below were taken by Ryksen.

There are minuses to living in a largely post-war city like Edmonton. Ask any urban planner and they’ll point to the era as the antithesis to good urban design.

New suburbs were built around the private automobile, not a streetcar or trolleybus. Roads became wide and winding; lots large, density low. More and more, basic needs became further and further out of reach for anyone who didn’t drive. Malls replaced traditional shopping corridors. Downtown struggled, stagnated and effectively died. The inner core rotted. There’s no denying that the post-war push saw a shift in lifestyle that most North American cities have yet to recover from. 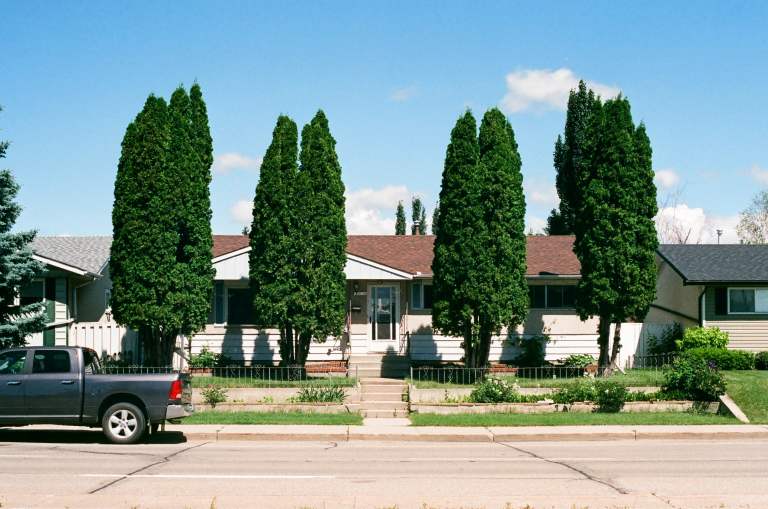 But perhaps one minuscule caveat to the era exists: the architecture that dots these car-centric subdivisions. It’s a style one could almost dub “Innocuous Modern” — pieces of Modernism that sit largely ignored or unnoticed, passed by thousands each day without a second thought. They’re often restrained, but still unique, examples of a mid-century era styling that are perfectly inoffensive and never draw the eye with any semblance of gaudiness.

In Edmonton, the perfect example comes in the form of “tract housing.” Generally, tract housing is a type of housing development where similar style houses are built on a piece of land, and subdivided into individual lots. In all respects, these types of homes represent a suburbanization or domestication of International Modernism. Elements of the dominant mid-century style, largely focusing on horizontal proportions, were eloquently transferred to residential properties. Typically long, rectangular plans are complemented by horizontally oriented windows and claddings; more-often-than-not, wood paneling against stucco. In other instances, simplified versions of prevailing trends, such as A-Frame roofs, would be applied. Basements came back into vogue, offering “rumpus rooms” that provided a private space for family and social life. Geometric motifs in the form of lattices or stonework added simple decoration, and optional cloth and metal awnings broke up monotony.

While undeniably plain compared to the more flamboyant Modernist structures of the era, they nevertheless speak to a shift away from the pretensions of past styles. For generations, homebuilders used detailing to evoke the spirit of the English countryside manor, Dutch Revival home or Spanish villa. As A Guide to Canadian Architectural Styles remarks, “the ahistorical nature of Internationalism and its implied faith in a new egalitarian world order suited post-war optimism” and called to homebuilder and homeowner alike.

Homes in Alberta: Building, Trends, and Design has this to say about houses of the era: “single storey houses with a more pronounced horizontal profile than had been usual before the war began to appear on the scene in the mid 1940s. These too were called “bungalows,” and while they took their essence from the bungalows of the early twentieth century, they could well be described as a new house form… Eaves reappeared, and an almost obligatory feature was a “picture window,” which defined the front of the house and dominated the living room, and throughout the 1950s and 1960 these windows became larger and larger.”

By 1958 eight out of every 10 houses in the province were built to pseudo-modern plans like these. As with today’s snout-nosed homes and banal suburbs, those of the 1950s and ‘60s drew ire for their uniformity. Noel Buckland Dant, Edmonton’s visionary Chief Urban Planner, derided properties like them, once saying that they were, “almost identical houses spaced as closely together as the bylaws and regulations of loan institutions would allow.” While builders attempted, “to disguise the essential similarities of the houses…attempts at disguise fool no one and the sameness and dullness of residential areas in the average city is to be deplored.” 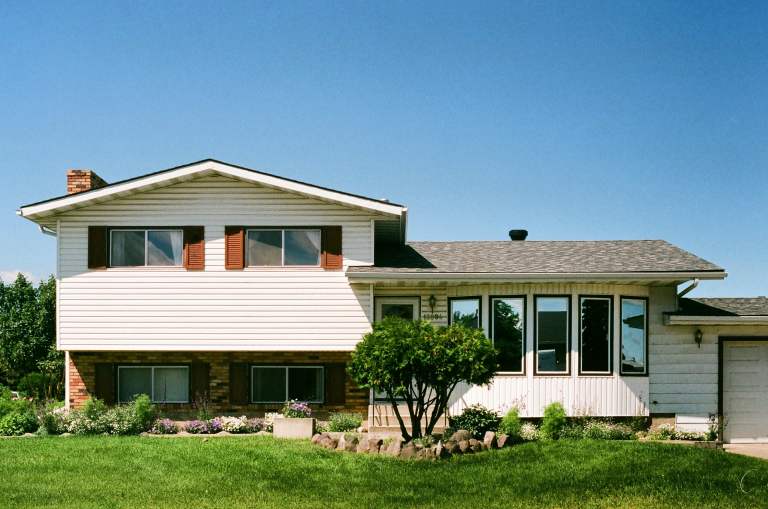 When Dant said, “the average city,” he was right. Designs like these aren’t just exclusive to Edmonton—they can be found just about anywhere the province’s major residential builders like Alldritt, Nu-West, Quality Construction Ltd. or Oakland Homes build, from Fort Saskatchewan to Calgary. Yet, to me, they’re always synonymous with Edmonton. Perhaps it’s in part to growing up in a community where tract housing like this was the norm, or perhaps in part of how so much of the city’s built fabric is tied to them thanks to its major era of growth, nothing screams “Edmonton” more to me than these Modern suburbs.

Even the most mundane of municipal utilities likewise followed in the steps of their private residential counterparts, becoming important, if admittedly austere, examples of the Modernist style. The Number 14 Fire Station, located in the north end community of Kilkenny, is a perfect example. The design of the station was a standardized plan, used once before at Station Number 13 in the Aspen Gardens neighbourhood. The City of Edmonton’s own Architects Department, which had been responsible for designing the majority of municipal facilities since the Great War, drafted the plan.

These types of buildings are easy to take no notice of thanks to their ubiquity, but they speak volumes to the city’s history and where it was during a certain place and time. The discovery of oil at Leduc No.1 ushered in an unprecedented boom. Construction, a long stagnant industry, again picked up, reaching a rate unseen since the speculative days prior to the Great War. In 1951 alone the city issued $36,300,000 worth of building permits—in 1954 they issued $68,330,000. “For a city whose building program of $8,000,000 in 1945 was the largest in 25 years, this unprecedented boom was almost incredible” read a boisterous tourism brochure. A baby boom soon followed, as did a surge of new European immigrants searching for better lives after the Second World War. Joining them were tens of thousands of new oil workers and businessmen. Between 1945 and 1960 Edmonton grew from 111,000 to 261,000. The National House Builders’ Association reported that the city was constructing homes at a rate of 23 per 1,000 people, compared to the national rate of 14 per 1,000.

In time these homes and public service buildings will likely become invaluable heritage resources. In many respects places like Ottewell or Londonderry are no different than residential communities like Norwood or Westmount. Sure, age separates them as does style, but Ottewell and Londonderry represent the same thing in Edmonton’s built story that Norwood and Westmount do—tract housing built in a stripped down and markedly more innocuous versions of the prevailing styles of the day, that manage to give a faint glimpse into a specific period of growth and what it must have been like to be there.

Builders listed here represent a selection of frequently listed companies featured in the pages of the 1967, 1968, 1969, and 1970 issues of the Edmonton Journal’s advertisement and homebuilders’ section.